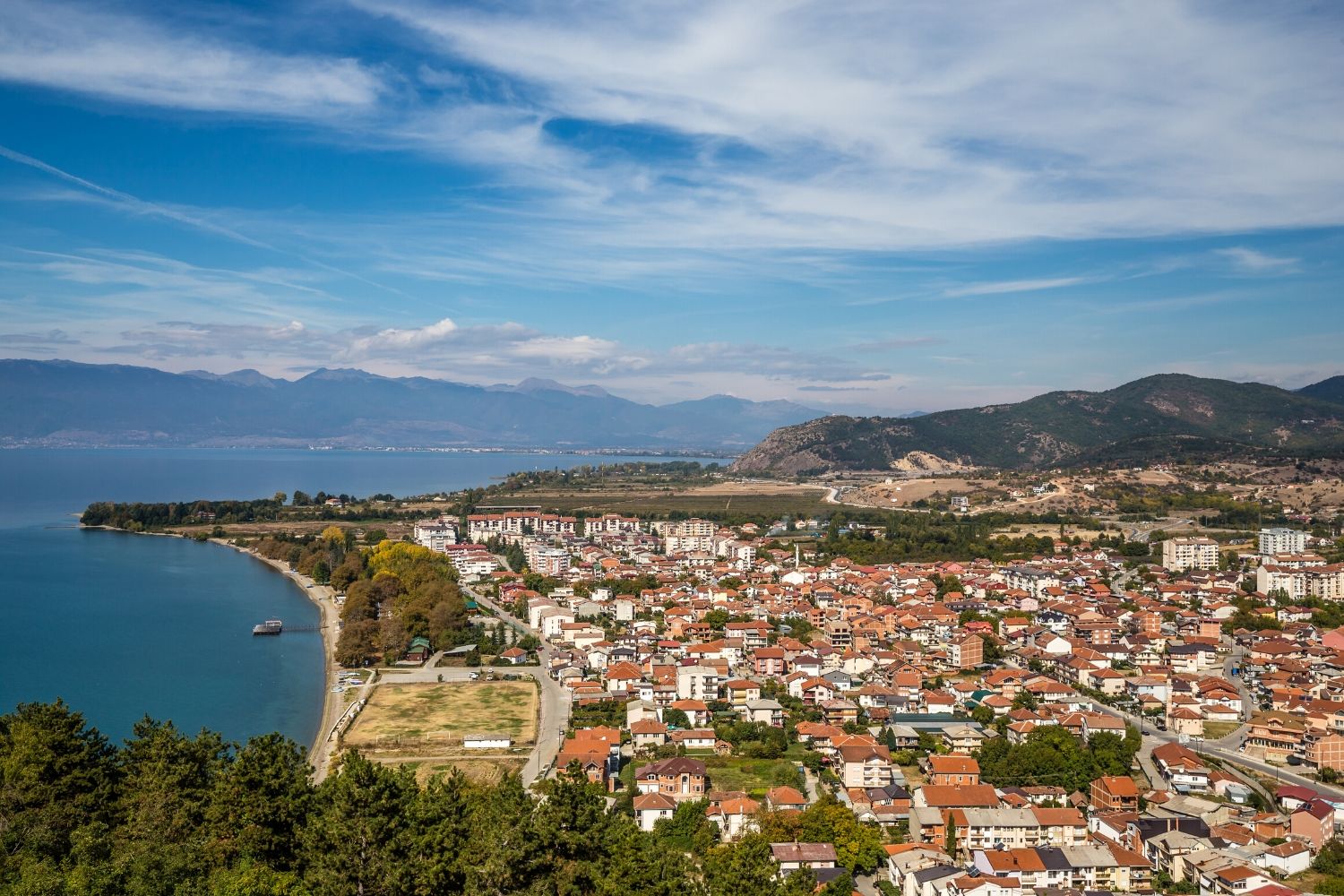 On the short bus ride from Skopje to Ohrid, I came to realize how much I love traveling Macedonia. It’s safe to say that the Balkans are my favorite area to travel through in Europe.  With the friendly people, affordable prices, and amazing coffee we almost had to be ripped away from Serbia.  After spending a month in Belgrade and Niš, we knew that it was time to move onwards to Macedonia to see the Church of St. John at Kaneo and more. We arrived in the capital of Skopje and had a unique time delving into this compelling city. All we heard from the locals in Skopje, was that we just had to go to Ohrid, Macedonia.

I’ve seen plenty of lakes in my day.  Heck, I even grew up on one.  So what was the big deal about this Lake Ohrid? Riding on the minibus from Skopje to Ohrid,  I still couldn’t quite gather why everyone in the Balkans had a crush on lady Ohrid herself. But boy was I in for a surprise when we finally got to this Macedonian Gem in early April.

Skopje to Ohrid by Bus

After spending four months in the Balkans, I have come to realize that transportation is not as simple here as in the rest of Europe. Trains are generally less efficient, and bus travel can take a very long time. We arrived at the bus station in Skopje with little information on the travel times to Ohrid. Thankfully, minibusses from Skopje to Ohrid run quite frequently. The 170 km journey takes about 3 hours and costs a little over 450 MKD  (€8).

We were dropped off in the center of Ohrid near the main pedestrian street. There are dozens of locals renting out their lakeside guesthouses for a very low price, and we had about eight different people offering us accommodation in a five-minute time span. It’s safe to say that arriving without a pre-booking is okay, and even the norm here.  We stayed at a great Airbnb and paid €15 for the whole studio apartment! {For $40 off an Airbnb rental click here!}

The first time I saw Lake Ohrid I was amazed at its beauty. The second time I saw it I was still amazed,  and the amazement never stopped for the remainder of our stay in Ohrid. I now get why the everyone made such a big deal about this place, I mean this lake was stunning.

Read More: {Become a More Eco-Friendly Traveler in the Balkans}

The water is crystal clear with a deep blue coloring, and every day it looked like glass.  What was even better was the weather we had in April – blue skies and sunny every darn day! Visiting Ohrid at this time could not have been more perfect. Prices were low, the weather was amazing, and I think we were two of the ten tourists in town.

What to do in Ohrid?

The first thing we did was run straight to the water and breathe in the fresh air while being surrounded by complete bliss. After staring into the distance for about 5 hours, we decided we better get doing something active!

Ohrid is a large town with the typical large pedestrian street. Here on Bulevar Makedonski Prosvetiteli, there are the typical souvenir shops, ice cream stands, and many of the favorite franchise stores. The boulevard is clean and enjoyable to walk through. At the end of the boulevard, there is a large harbor with local fisherman offering to take passerby around the lake at an agreeable price for €5 in the off-season.

Ohrid is home to 365 churches; however, the Church of St. John at Kaneo was our favorite and most impressive.  The Church is located on the edge of Ohrid, right past all the waterfront restaurants and bars. It is conveniently placed on the edge of a cliff and is the best view of Lake Ohrid and the surrounding mountains. In the summertime, there are spots along this cliff for diving, but I think we would have been considered crazy if we jumped in this freezing water in April.

Read More: {The Best Backpacks to Travel Europe With}

The Church of St. John at Kaneo

After spending over a year traveling Europe, I tend to get “churched out” very fast. For those like me, I found it quite enjoyable to climb to Samuel’s fortress. I was previously unaware that Ohrid is one of the oldest known civilizations in Europe, and the lake is over 3 million years old! This fortress was built in the 10th century but is actually thought to be built over fortifications from 350 BCE. This makes Ohrid not only a UNESCO’s World Heritage Natural site, but a Cultural one as well.

Ohrid is home to a number of great hiking trails with astonishing views. Many of these trails are in Galichica National Park, which has an entrance just at the south end of Ohrid.

Read More: {How Much Does it Cost to Backpack Europe?}

Paragliding had always been high on my list, but my one stipulation was that I had to fly high somewhere incredibly beautiful. Ladies and gentleman, I am pleased to say that I finally found that place. Ohrid was the perfect place for us to sail into the sky and feel like the birds that are lucky enough to fly over Lake Ohrid.

After we were suited up with our harness and the glider was completely spread out and unfolded, it was take off time. I was first and was completely unaware that the running start required for takeoff was so difficult. I was told to run and not to stop running until we are in the air. Easier said than done. My guide and I ran with all our might, but with a huge parachute battling the wind, and being completely strapped to someone else, I fell flat on my face.

The second time is a charm and after the first mishap we were up, up, and away!

Read More: {Here is Why the Balkans are Our Favorite Region of Europe}

The number of restaurants with a view in Ohrid are endless. Every night we had an incredibly tough time deciding where to go to grab a beer, coffee, or food. The good news is that Macedonia and Ohrid are incredibly affordable and we were able to eat very well for under €7. Here were a couple of our favorite spots to eat in Ohrid.

The most popular form of accommodation in Ohrid would definitely be private guesthouses. Whether booking on Airbnb, Hotels Combined or find one of the many apartments from a local upon arrival – the options are endless.

We stayed at this Airbnb, which had a great location close to the city center, a fully equipped kitchen, and a comfortable bed!

Getting to and Leaving Ohrid

How to get from Skopje to Ohrid

Get Out of Ohrid

We were working our way down to Albania and found little to no information on how to travel from Ohrid to Tirana. Locals didn’t know, our Albanian host didn’t know, even the tourist information didn’t know the correct bus timetables. Like I mentioned before, travel in the Balkans isn’t exactly like it is in Western Europe.

We pieced what little information we could find off dozens of websites and made the journey to Tirana from Ohrid. Thankfully we were pretty successful! To get to Tirana from Ohrid by bus we first had to get to the main bus terminal in Struga. Struga is a neighboring town that takes about 15-20 minutes to get to by bus (40 MKD).

We walked to the Old Bazaar in Ohrid, crossed the street and went to the only bus stop we could see. We were short on time and there was no bus in sight, so we hopped into an old car that claimed to be a cab. The “cab” cost us 250 MKD (€4) and took less than 10 minutes to get to the Struga bus stop.

We found that there were two buses running to Tirana in April, at 9am and 12:30 pm, tickets were €8. Five hours later we were in Albania! Mission accomplished.

Plan For Your Trip to the Balkans

Sometimes it’s nice to let someone else do the travel planning.

Book a Tour on Viator

If you’re wondering what travel necessities to bring to around the world then good walking shoes should be your top concern.

I love real books, but for traveling it can be easier to carry a lighter and more compact item like a Kindle. Plus, then you can download new books on the go!

Get the Kindle Paperwhite

*This post is sponsored by Zappos, all thoughts and opinions are my own There’s a change in the air, which means it’s time for our favorite season, Fall. Last year…

When exactly is the best time to visit Bali? From its beaches, beach parties, and surf credentials to its emerald rice paddies, yoga classes, and unique culture, Bali is a…

The North Coast 500 was originally launched back in 2015 to increase the number of visitors to the Scottish Highlands and it has most definitely achieved that. The North Coast…

Jasper National Park is one of the most beautiful places to visit in Canada. Like it’s southern sister, Banff, there are many things to do in Jasper all year round….