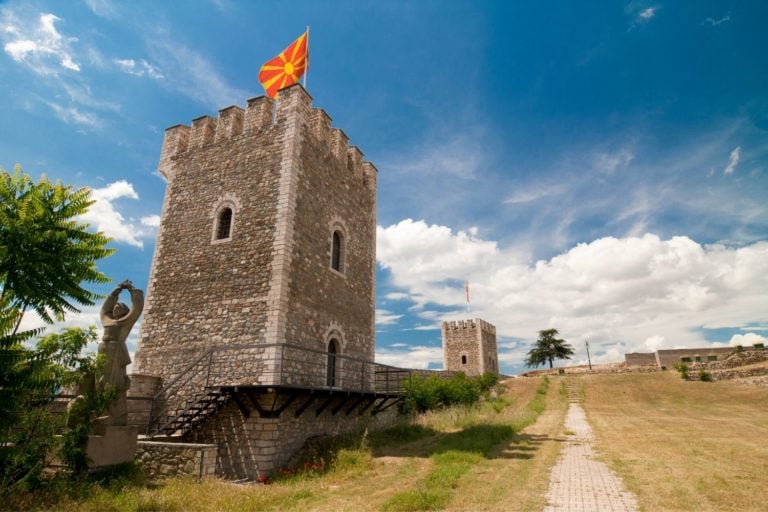 So many things to do in Skopje, so little time. The capital city of Macedonia is, without a doubt, one of the most interesting cities I’ve been in. Skopje is very well connected with other Balkan cities like Pristina, Tirana, Thessaloniki, and Sofia and is quickly becoming a hot destination on the Balkan travel route.

Unfortunately, we were only able to spend one full day in the city. Naturally, we wanted to see and do everything in that day so here are the best things to do in Skopje!

Best Things to do in Skopje

We woke up bright and early in our quiet neighborhood apartment in Skopje, eager for what the day would bring and to travel Macedonia.  Usually, when we only have one day to explore a new place, we spend hours trying to map out the day to see the optimal sites.

Starting the day at Vodno Mountain

The moment you step outside in Skopje and look up you will see a massive cross towering over the city center. The Millenium Cross is a 66-meter high cross that was built in 2002 and is actually the fourth tallest in the world.  At night it dazzles and shines bright, but during the day you can see it up close. It is located at the top of Vodno Mountain, overlooking Skopje’s city center. You can reach the cross by either a very strenuous hike, or by taking a bus to the middle of the mountain and then continue by cable car.

Taking the cable car was our original plan, but when we arrived the cable car was not working. There was no sign, the workers just said: “not today.” A local exclaimed that this is how things go in Skopje, sometimes things work and sometimes they don’t without notice. This did not ruin our plans to get a beautiful view of Skopje though! We decided to hike through the wonderfully quaint park for a great viewpoint over the city.

The most common religion in Macedonia is Orthodox Christian, and there are plenty of churches to prove it. We gallivanted in and out of these unique churches throughout the day. Each one was so different and featured amazingly preserved frescos.

On to Matka Canyon

About a 30-minute drive out of the city center lies Matka Canyon. If you can only do one thing in Skopje, go explore this beautiful gorge. I never knew that such beauty could lie so close to a major city, but thanks to our Skopje tour we were able to spend a significant amount of our day here. Matka is a very popular destination for locals to swim, kayak, rock-climb, and enjoy the nature when the weather is nice.

Walking along past the major dam we were immediately enticed by how clear the water in the Matka Lake was, it was beautifully pristine.  We were told that there were 10 caves at Matka Canyon, but the most impressive is Vrelo Cave. So, we hopped on a local boat and our driver took us to Vrelo Cave.  The exact depths of this cave are unknown, but many claim that Vrelo is one of the deepest underwater caves in the world.

Across the lake from the massive cave restaurant and hotel (you can’t miss it) is a large green area. Ask one of the local boats to take you across the lake, and there lies the beginning of a steep, but quick hike up to the St. Nikola Shishevski Monastery. It’s one of the top things to do in Skopje. The hike takes about 20 minutes and is a steep incline, but you will be well rewarded with “spiritual heaven” and stunning views of Matka Lake.  We learned that there is no historical data for St. Nikola Shishevski Monastery, but it has nevertheless become a popular hangout for local Macedonians. Now for the easy part of the climb, hiking down!

After all of the hiking and exploring, we had managed to work up quite the appetite. We hit the streets in Skopje’s old cafe district. After spending more than a month in Serbia we weren’t sure what to expect for a late lunch. Serbian cuisine is generally very meaty, so we were pleasantly surprised when the waiter brought out plenty of cooked vegetables and fresh dips. The vegetarian lunch was at a typical Macedonian kafana in the bohemian quarter of Skopje, and was delicious. We were served course after course, with no shortage of delicious Macedonian red wine. If you need another reason to travel to Macedonia, it should be for the food.

Even though it was nearing 17:00, the day was far from over. The April sun was still shining and we had plenty left to see. We walked up to the old Kale Fortress, a symbolic site located in the old town. Scaling the old walls doesn’t take too long, but is worth the short and easy climb up to overlook the city. Kale Fortress is located on the eastern bank of the Vardar River and across the street lies the entrance to the old bazaar. After a couple of trips to Turkey, we have come to absolutely love bazaars, and the bazaar in Skopje was no different.  Walking through this old bazaar feels like walking back through time; here you can find old hammams, precious silks, spices, and plenty of jewelry.  The bazaar is quite small and left uncovered, but the ambiance truly made us feel like we weren’t even in Macedonia or 2016 anymore!

Inside the Old Bazaar is some of Skopje’s liveliest nightlife. Plenty of bars, restaurants and even some clubs line the small cobbled streets. We stopped at one cafe for a traditional Turkish coffee before heading to a local bakery to have the recommended “parachute” dessert.

I mentioned in the beginning of this post that Skopje is one of the most interesting cities I’ve ever traveled to. That is largely in part due to Skopje 2014, a government-financed project that has led to the construction of new statues, museums, and government buildings. One of the goals was to make Skopje more visually appealing; however, as an outsider walking through the city felt like a mixture of Epcot and Las Vegas. There are new and sometimes even bizarre statues everywhere, and they are one after the other. I felt like Oprah came through and gave everyone their own personal statue.

We loved seeing this area with a local and being able to ask questions about the new Skopje that we wouldn’t be able to normally. It seemed that the general consensus was that Macedonians are somewhat angry and confused at their government for constructed such a strange and costly city. If you don’t want to miss these new buildings and statues, don’t worry – there is no way you can miss the 48 ft tall “Warrior on a Horse” in the town center.

The sun had set, and our fun-filled day in the capital was coming to an end. We made the most out of our one day in Skopje, and we truly felt that we saw some of the heart and soul of this modern city.