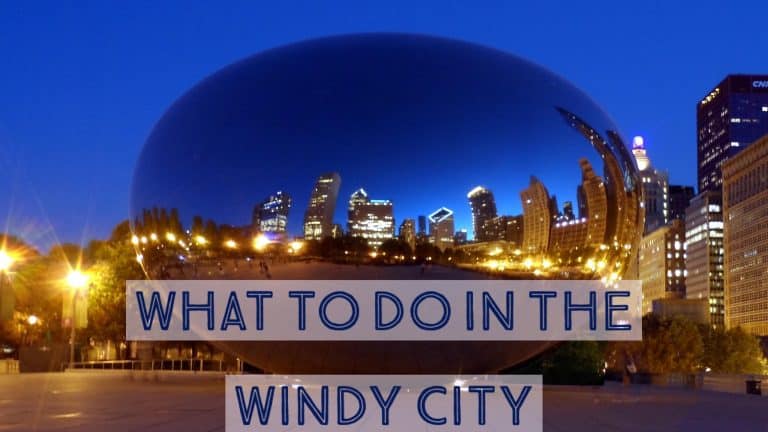 Chicago, the Windy City, is one of the most iconic American cities. Long overshadowed by New York City, it has fought fiercely to create just as distinct an identity of its own. Chicago is a sports city, a foodie’s haven, a home for the arts, and the birthplace of American architecture.

It’s a city that would take a lifetime to understand, but you don’t have a lifetime — you have an evening. So what do you do with just a few hours?

Only A Couple Hours in Chicago?

There is so much more to Chicago than its bustling city center, but with only a couple hours, you don’t have time to delve too deep. Staying at a downtown Chicago hotel will give you the opportunity to discover many of the Windy City’s treasures in a short amount of time.

Taking a selfie in the reflection of the Bean is a rite of passage when visiting Chicago. The Bean is a large metallic public art installation, named Cloud Gate but nicknamed the Bean for its shape. The Bean is located in Millennium Park, a public space filled with gardens, pedestrian walkways, and art installations. The park was commissioned to celebrate the new millennium and was finished in 2004. Over the years, it has become a celebrated accomplishment of urban planning and art, giving locals and tourists another wonderful place to play in the Windy City.

Not to snub the White Socks, Bulls, Blackhawks, or Bears — but baseball is America’s pastime, and the Cubs are Chicago’s team. When given the chance, there’s nothing more American than heading to Wrigley Field for baseball, beer, and hotdogs — Chicago style.

Chicago is a foodie’s haven. There is no shortage of culinary delights in the Windy City. In Chicago, you have access to everything from Michelin Star restaurants to dive bars and food trucks. A great starting point is to check in with your hotel front desk and ask what the staff members recommend based on your preferences — or just head to Alinea or to Girl & the Goat.

If you’re looking for fine dining in Chicago, you certainly have it with Alinea. This three–Michelin Star restaurant has been serving customers since 2005. Chef Grant Achatz delivers New American–tasting dishes with a minimalist spin and creative plating.

Top Chef winner Stephanie Izard, the chef of Girl & the Goat, has been serving up small plates from dishes around the world in a relaxed atmosphere with plenty of character since 2010. This place is quirky, cool, and delicious and has become a staple of Chicago eats.

Night on the Town?

New York may have SNL, but Chicago gives birth to its brightest stars at the Second City, a Chicago comedy club. The list is too long to name them all, but Bill Murray, Stephen Colbert, Tina Fey, Dan Akroyd, Mike Myers, John Candy, Joan Rivers, and the Belushi brothers have all performed here, among many others. It’s an institution that is sure to deliver a night of sparkling live comedy.

If you’re looking for a good cocktail, Scofflaw is certainly a good place to head. It specializes in gin cocktails, craft beers, and some tasty but inexpensive eats. The bar serves up drinks in a comfortable and chic environment perfect for a cocktail.

Lay Your Head Down

Chicago certainly has no shortage of hotels, with rooms to accommodate everyone’s needs. We’ve suggested before, in our how to save on accommodations post, that booking directly with hotels or signing up for their newsletters often leads to scoring a deal. We suggest staying at the boutique Kimpton hotels by IHG, which are a personal favorite of ours.