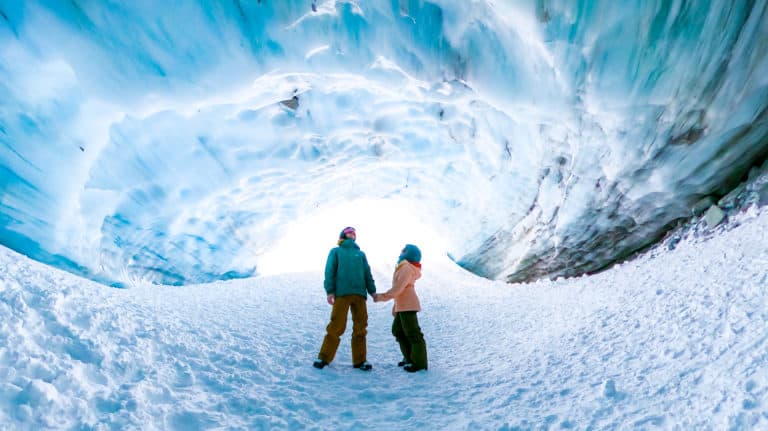 Skiing at Whistler has been on our bucket list for years. After moving to Canada last year we knew we couldn’t wait any longer to get to one of the most famous ski resorts in the entire world.

We heard many good and bad things about Whistler Blackcomb, and knew we just had to make the trip to British Columbia and check it out for ourselves.

If you’re also daydreaming about a ski trip to Whistler read on for what to expect at Canada’s premier ski resort.

Skiing at Whistler – The Stats

Skiing at Whistler Pros and Cons

If you are flying the best way to get to Whistler is to fly into Vancouver International Airport. Vancouver is a two hour drive away from Whistler. So you can either rent a car in Vancouver and drive yourself (though parking is limited in Whistler Village) or you can utilize the Whistler Shuttle.

We flew from Calgary and landed in Vancouver. Before we continued onto Whistler we did some fun things in Vancouver and also stopped off in Squamish for a day.

Where to Stay in Whistler

There are many hotels to stay at in Whistler. Including some great ski-in/ski-out accommodations at both Blackcomb base and Whistler base.

There are tons of amenities here including a huge fitness center, outdoor spa with a full service bar, apres-ski lounge, and yoga studio. The Fairmont has underground parking for guests and valet if you want that as well. Once you park in Whistler, you likely won’t need your car again until you leave as there is so much to do, see, and eat in Whistler Village.

The Fairmont also offers daily hotel activities like two yoga sessions, a mountain tour, cultural visit, snowshoeing, skating, and aquatic fitness. So if you’re not much of a full time skier there are other activities to keep occupied.

The Fairmont also is home to a few fantastic restaurants. Including the Grill, which I will touch on more later.

Reasons to Love Skiing at Whistler

Whistler Blackcomb is consistently ranked as the Number one ski resort in North America. We were dubious of this as we’ve been to many fantastic ski resorts in Canada and US but were pleasantly surprised with what Whistler had to offer.

With 8100 acres of skiable terrain, there is a huge variety on offer at Whistler. Think steep and deep. Chutes, bowls, glades, and awesome high alpine terrain. During our four days at Whistler, we were constantly delving into new advanced awesome freeride terrain. Some of it was downright scary, but epic. Whistler is known for being extremely busy, and it is. But in general, the higher you go – away from the groomers – the more empty space you’ll find yourself with.

Even though there’s a lot of advanced terrain there are still long cruisers and amazing corduroy for families and children to enjoy. Check out the Peak to Creek run on Whistler for the longest run ever!

There are two mountains!

Whistler and Blackcomb are two side by side mountains connected by a pedestrian village at the base and the Peak to Peak gondola at the top. Just Whistler or just Blackcomb mountain would be enough to be on par with any other ski resort in Canada, but when they are combined it makes the whole ski resort absolutely huge. You’ll never get bored here, and even with a season pass, I doubt you would be able to check off every single run.

At times there are almost too many options to choose from at Whistler. Since we were stationed at Blackcomb we pretty much hung out on Blackcomb mountain every day. Not because we didn’t want to get to spend more time Whistler, because we did, but unfortunately with only four days it was impossible to explore both huge mountains properly.

Revelstoke Mountain and Fernie still has the best ski treeing I’ve ever been on, but Whistler didn’t disappoint. You’re not hard pressed to find epic gladed runs here. And many of them are STEEP. The great news about the glades is that they often stay quiet for a little longer and hold snow better on a pow day.

Whistler has an average annual snowfall of 11.2 meters, so the chances of seeing some fresh snow while you’re skiing at Whistler is pretty good. We visited for four days in early March and saw great snow two of those days. It is BC coastal snow, so the snow is more wet than you may be used to. It’s not quite JAPOW but still so much fun to ride none the less.

Whistler has a high vertical so for the best snow head to the top. Towards to bottome even in early March it was very spring-like and at some points even raining.

There are 37 modern charlifts scattered around Whistler. Most of them were fast and efficient and got us going to where we needed to go fast. Whistler sees its fair share of inclement weather meaning that when there is high wind the chairs won’t operate. Thankfully, there are many sign boards letting skiers know which chairs are running and which are not.

I love being able to ski in and out of my accommodation. It makes life so much easier and when it’s available. On mountains where it’s available I always book what is on offer. Our home mountain is Lake Louise, where there is no resort accommodation so when I travel to a ski resort destination like Whistler ski in/ski out accommodation is very much appreciated.

You’ll be spoilt for food options at Whistler. On mountain there is never a bad place to stop for lunch after skiing all morning at Whistler. There are plenty of mountain huts and cafeterias to dip into. Our favorite was the Crystal Hut on Blackcomb that specializes in tasty waffles.

Down at Whistler Village and Whistler Creekside you’ll have even more options. Head here if you want to enjoy the town atmosphere for a bit, plus the prices in the village are slightly lower than the mountain huts. Our favorite budget meal was at Pizzeria Antico.

How much do Whistler lift tickets cost?

All these nice facilities at Whistler come at a cost. Whistler is the most expensive ski resort to ski at in Canada and on the higher end in all of North America, the only thing making it cheaper than the Colorado ski resorts in the states is the exchange rate.

However unlike many other ski resorts in Canada, Whistler is a full service ski resort town. There’s an awesome base village, plenty of hotels, and all the amenities on the mountain that you can’t find in other old school resorts.

One day lift tickets at Whistler range between $160-$180 CAD a day, which can get really expensive for a week long family vacation. You can score some deals if you have an Ikon or Epic Pass.

Where can you buy Whistler lift tickets?

It’s best to buy lift tickets online beforehand otherwise you could be wasting your precious day standing in line to buy lift passes.

Other Things to do on your Ski Holiday in Whistler

There are many things to do in Whistler that aren’t skiing. Some suggestions are:

Scandinave Spa: A 20,000 square foot outdoor spa to enjoy while looking out at the mountains. Quite a relaxing place to head after a day out skiing in Whistler.

Vallea Lumina: We loved our time here! Vallea Lumina is an outdoor lightshow in the forest. A chance to reconnect with nature on a whole new level.

Where to Eat in Whistler

There are so many places to eat in Whistler it’s tough to narrow it down on where to go. A few of our favorites were:

The Grill Room: This is the Fairmont’s signature premier restaurant. The Grill Room is a great place to come for special occasions as it’s intimate and has a delicious menu. We had reservations here on our last night in Whistler and loved it. From the appetizers to the wine list and entree everything blew us away. The Grill Room specializes in steak, seafood, and chops. Many of their ingredients are sourced locally and beef is Canadian AAA Prime beef.

Pizza Antico: Wow I’m so happy we found out about this place. Pizza Antico dishes up amazing pizzas and craft beer. Everyday from 3-5 they also have a great happy hour special. $8 CAD Margarita pizzas and $4 CAD beers – a steal in Whistler.

After living and skiing in Canada for three years we had heard some poor reviews of Whistler. We of course, knew we had to go see what it was like for ourselves before making any judgment.

We had an amazing four days skiing at Whistler. I was blown away by the terrain on offer, and even on busy days I was still able to find some freshies.

However two things we heard about Whistler Blackcomb were that it was expensive and crowded. Both, are true.

Coming from Lake Louise, where people are already unhappy about paying $120 CAD a day for a lift ticket and it’s super quiet, I was a little shocked at the high price of lift tickets. I’m sure part of the reason Whistler Blackcomb is so expensive is that it is two mountains offering extensive terrain, but in all honestly, we skied from 8:30 am to 4 pm every day and had plenty to do on just one mountain.

The crowds, although not terrible, were some of the most I have seen at a North American ski resort. Whistler is awesome, especially on a powder day, everyone knows it. So expect to wait in a few lift lines and for fresh tracks not to last too long here. However if you don’t mind waiting 10 minutes and know where to go to find pow you’ll have an epic time.

We live in this beautiful area of the world and want to make sure you have an epic time in the wilderness. Check out The Banff Blog for more travel information. 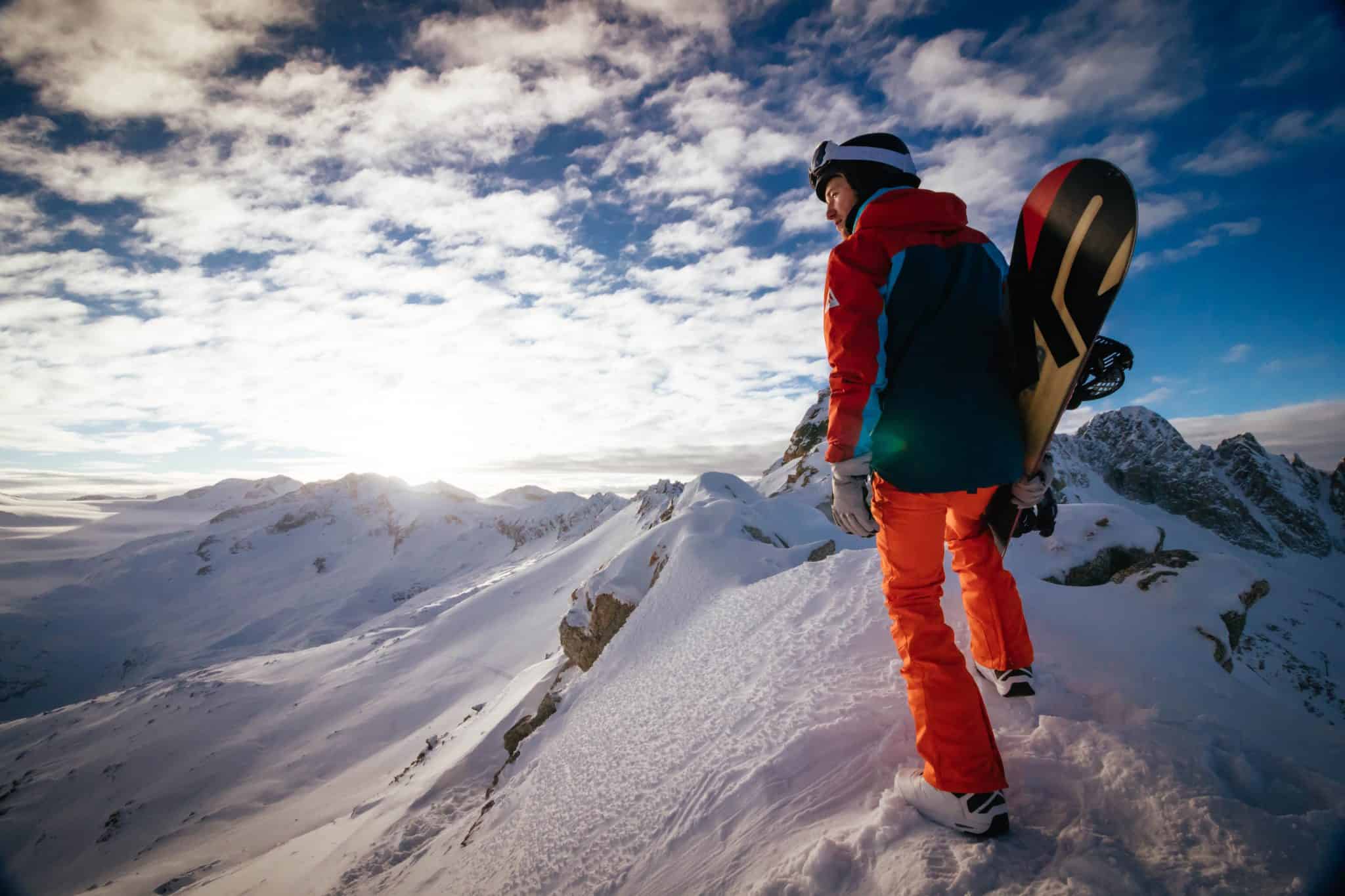 With winter on its way, we put together this roundup of the cheapest ski resorts in Europe we’re adding to our bucket list. We love to snowboard; however, there is no…

All you need to know before you travel to Niseko Ski Resort in Hokkaido We wake up early in our bed in Niseko Village and realize we made it, we… 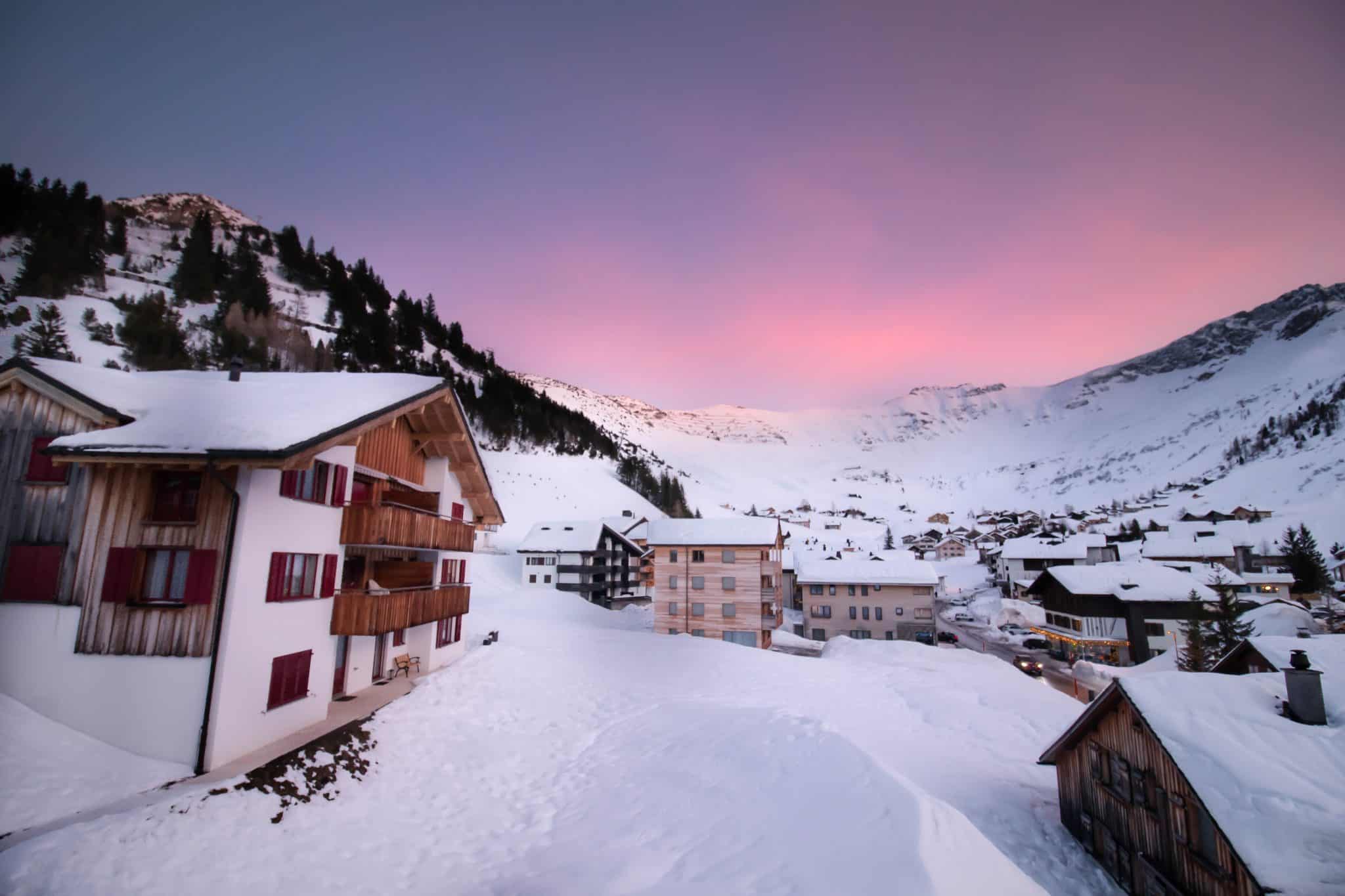 We’ve been on a mission to explore some of the smallest countries in the world. It’s what recently brought us to Luxembourg and took us through Swaziland last year. On… 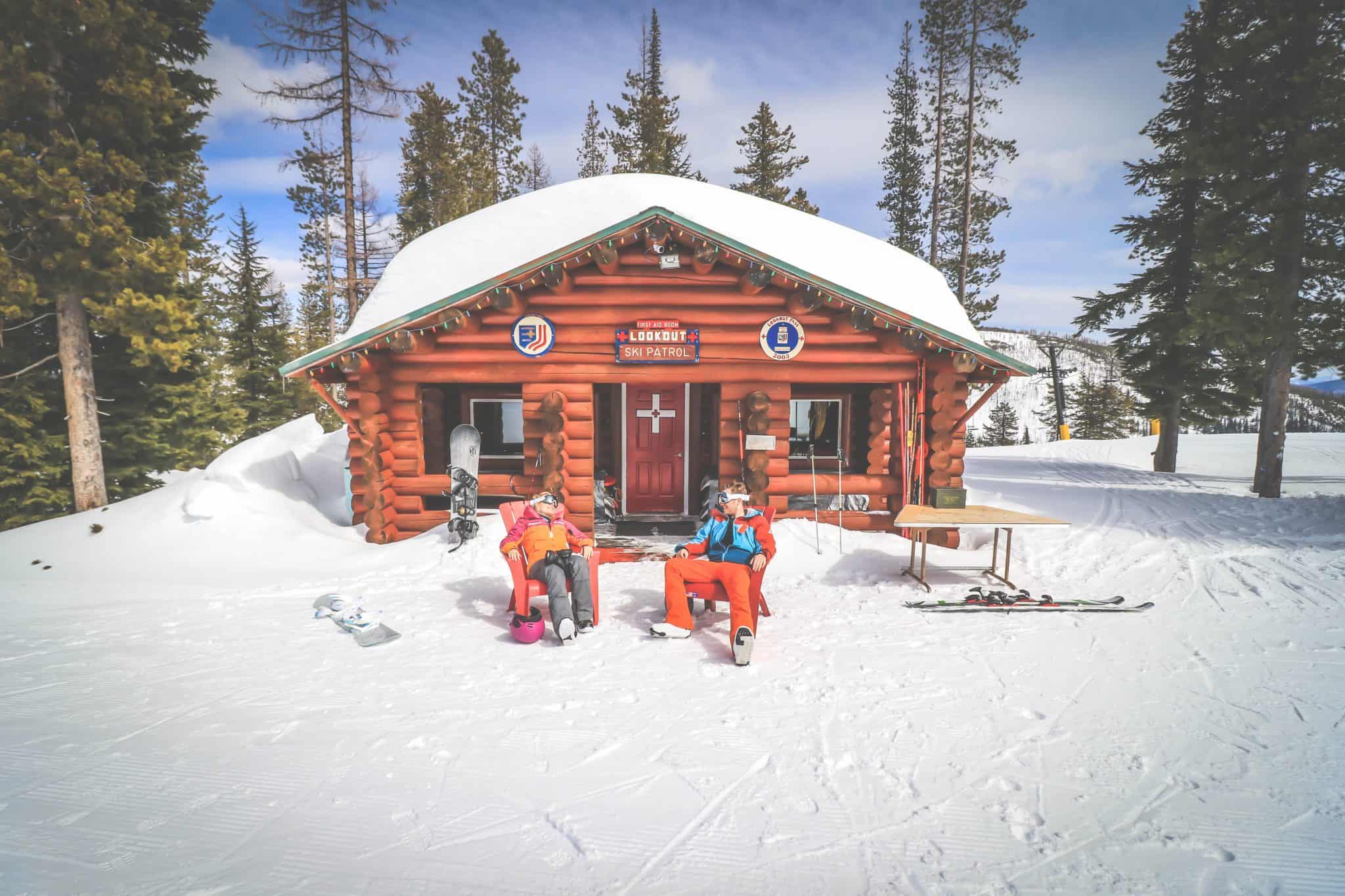 Post Summary: The Best Ski Resorts in Idaho for Epic Powder Affordable and ski trip are not typically two words that go together. We’ve spent the last few months touring a…