There is no country more stirring than Namibia for desert landscapes. Its name even comes from the world’s oldest desert that covers much of the country. No country on earth can compete for the type of natural beauty that awaits travelers in Namibia. You can find towering red sand dunes, dead tree valleys preserved in time, and utterly unique wildlife.

Elsewhere you can find massive canyons and rock formations at Fish River Canyon, Damaraland, and Spitzkoppe as the Naukluft Mountains rise out of the desert sand dunes. Namibia does not end there as the East stretches into the endless plains of the Kalahari and the Caprivi Strip turns into an oasis of floodplains and rivers teaming with wildlife.

We drove into Southern Namibia from South Africa and were greeted by looming rock formations and empty roads. The path before us wound through an arid canyon and came up to a plateau, and the perfect Southern Namibia self-drive itinerary laid ahead.  As we ascended out of the canyon the sun began to set. The change in weather created gusts of fiery red sand, that lit on fire from the descending sun. This all came within our first hour in the country. We had yet to make it to a single sight on our journey, but we had already come to our conclusion. 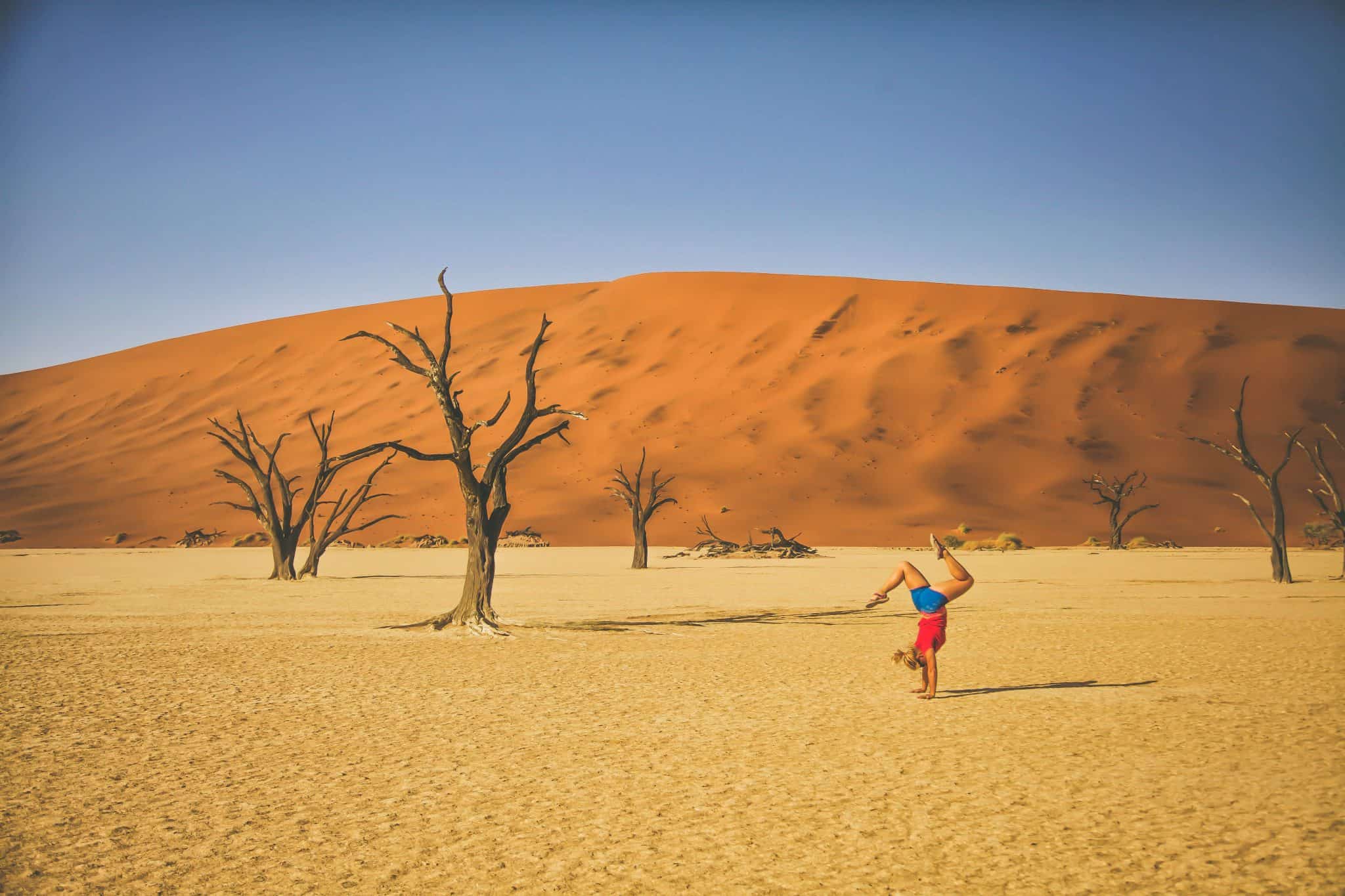 Post Summary: What to See in Namibia! There are so many things to do in Namibia that it can overwhelming to plan a trip around the desert country. Namibia is… 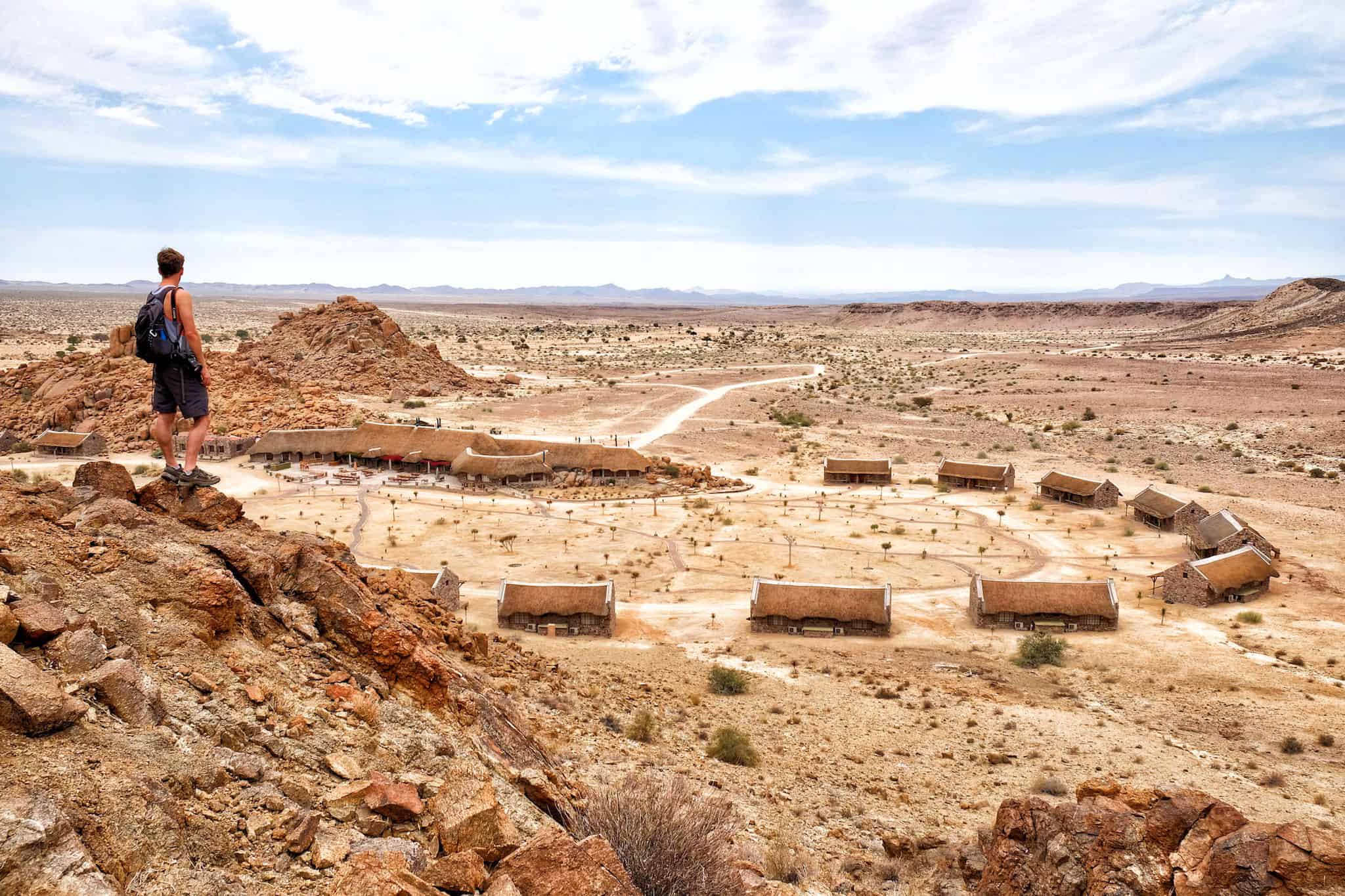 We drove into Southern Namibia from South Africa and were greeted by looming rock formations and empty roads. The path before us wound through an arid canyon and came up to… 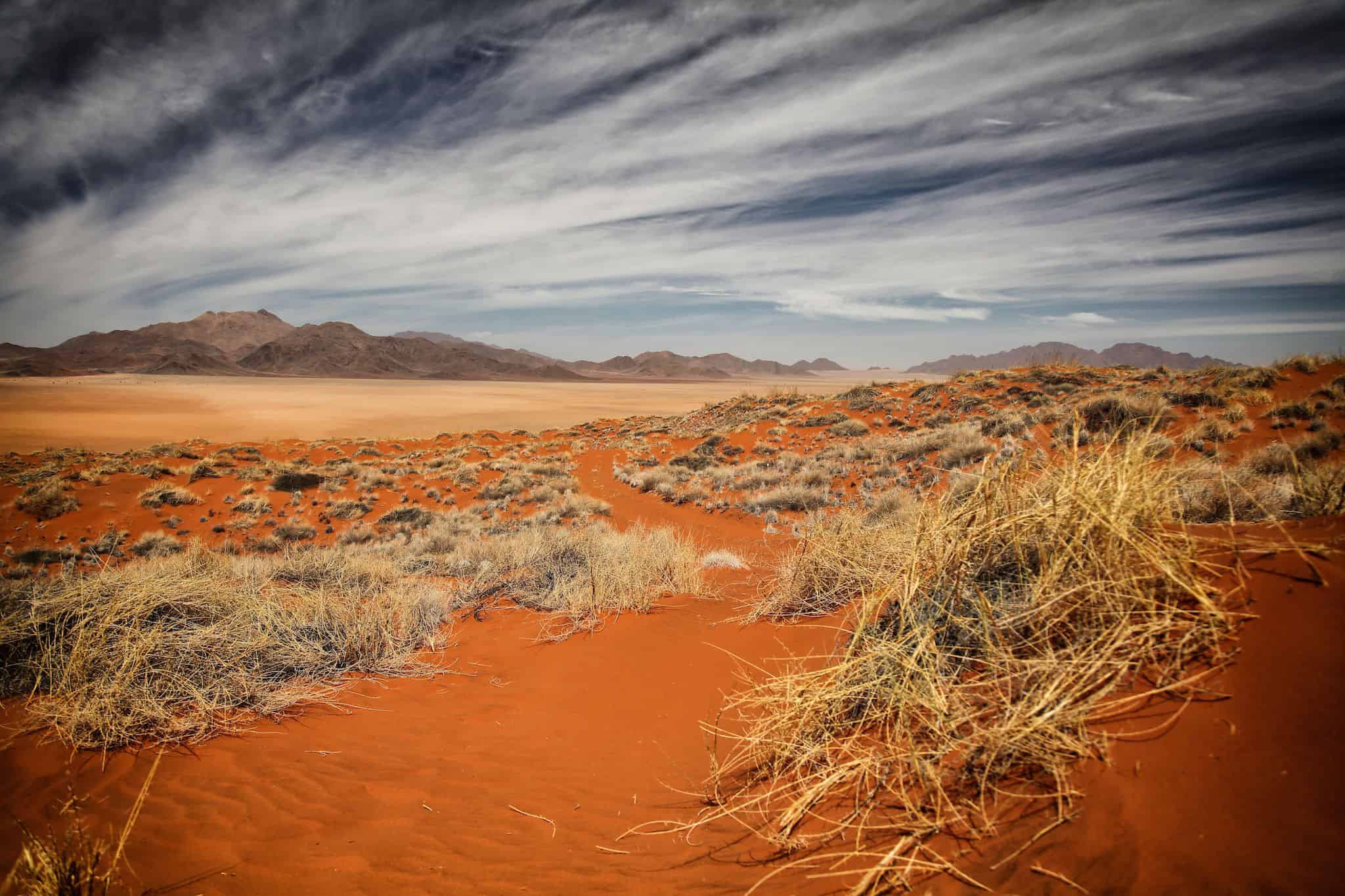 We had never read a single Namibia travel tip before driving straight into the country. When we crossed the Noordoewer border post from South Africa and into Namibia we had no…

In cities like Luderitz, Swakopmund, and Windhoek it’s possible to get a private room in a guesthouse or an Airbnb. This is a great option for couples and friends who want privacy on a budget. We booked an Airbnb in Walvis Bay that looked out over the lagoon of flamingos.

There are many lodges around Namibia that offer comfortable accommodation and usually come with a buffet breakfast and dinner. They are often visited by tour groups so if you are an individual traveler make sure to book ahead.

There are many luxurious places to stay in Africa and Namibia has no shortage of those. Lodges like Wolwedans and Wilderness Safaris provide luxury tents in beautiful destinations. These lodges are usually all-inclusive and provide top-notch safari activities.

Hosea Kutako International Airport is in the capital, Windhoek, and it is the main international airport. There are very few direct flights into the airport unless you are coming from other countries in Africa. However, a few routes run from Frankfurt, Doha, and Amsterdam.

Namibia’s buses, like most of Africa, aren’t the most reliable and are meant for local transport, not for tourists. The Intercape runs from Windhoek to Swakopmund, Keetmanshoop, Groonfontein and a few more small destinations. You can also get to South Africa and Victoria Falls with the Intercape, but be prepared for a long and grueling ride.

StarLine is run by TransNamib has a few very select train routes. Mainly between Windhoek, Luderitz, Keetmanshoop, and Swakopmund.

This is the best option for getting around Namibia. A car rental will get you everywhere you need to go. You don’t need a 4×4 in Namibia unless you are getting off the beaten path, but it certainly won’t hurt to ever have one.

Driving at night in Namibia is not safe as the roads can be pitch black with animals on the road. It’s important to note that some type of mechanical know-how is a good idea when on Namibian roads. Roads can be pretty empty and you could wait awhile for help should you need it.

Hitchhiking is common in Namibia. Although, in a country, with only two million people and twice the size of Germany you could be waiting awhile for a ride. It’s good for jumping in between towns and cities, but not for traveling to destinations.

Food is reasonably priced in Namibia.  Being a desert country, most products are imported from neighboring South Africa and slightly more expensive than there. You’ll only come across grocery stores in main towns like Walvis Bay, Swakopmund, Windhoek, Keetmanshoop, Groonfontein, and Luderitz.

Namibians love their meat, and like South Africa, Braai culture is huge here. German-style meat dishes can be had for 50 NAD-100 NAD.

Hard liquor is available at the grocery store we always carried a bottle of Gordons Gin in our truck. A pint of beer at a bar can cost anywhere between 30-60 NAD.

Things to do in Namibia

You probably don’t think of going to Namibia on safari, but Etosha National Park is one of the best parks in Southern Africa for a safari. Think for just $80 NAD a day you can see white rhino, elephants, giraffes, and lions. Not only is the park unique and unlike any other in Africa, it’s also the cheapest.

Imagine a quirky German town in an African nation with mountainous sand dunes at its back and the wild Atlantic Ocean at its doorstep – that’s Swakopmund.

It’s a cool town to explore for a few days and enjoy popular tours around desert activities. One of the most popular tours is sandboarding down the massive red dunes.

Did you know that the highest sand dunes in the world are in Namibia? That’s right the area of Sossusvlei is a large, white, salt and clay pan known for beautiful red sand dunes. You’ll want to get here at sunrise for the best photos and before the heat of the day sets in.

Seriously, by 9 am we couldn’t wait to leave it was so freaking hot. Most people will tell you to go to Dune 45 to watch the sunrise as it’s most well-known dune. I suggest skipping that and finding a dune of your own as all the tour buses and backpackers stake claim to Dune 45.

Hand out with flamingos at Walvis Bay

Do you love the color pink? Do you love birds? Well, you’re in luck at Walvis Bay. Every day thousands of greater and lesser flamingos come here to breed. It’s quite an impressive sight!

Have a sundowner at Fish River Canyon

Fish River Canyon is the largest canyon in Africa and one of the largest in the world. It is around 160 km long and 27km across while the canyon cliffs descend to almost 550m at points.

The formation of the canyon dates back to around 650 million years ago and began forming during the movement of tectonic plates as the supercontinent Gondwana split. It’s an impressive sight, especially at sunset with some sundowners in hand.

Visitors can hike the trail in the winter months from May – September; however, during the summer months, the risk of flash flooding prevents hikers from tackling the 88km challenge.

Dig into the Caprivi Strip

The Caprivi Strip is the Africa that we know. It is green, tribally owned, and filled with wildlife. Three of Africa’s mighty rivers flow through the small section of Namibia including the Zambezi, Okavango, and Chobe rivers.

Smell the beauty of the Cape Cross Seal Colony

The Cape Cross seal colony is a sight to be seen in Namibia. Along with the rocky point, hundreds of thousands of fur seals flourish.

We arrived in mid-November right when the seals give birth to pups. Bring nose plugs; the smell of thousands of seals is not a nice one.

Step back in time at Kolmanskop

The abandoned diamond-mining town of Kolmanskop was once a thriving place despite being in the middle of the Namib desert. In the early 1900s, a German railway worker found a diamond lying on the ground, and the rest is history. A town was quickly set up and grew in size.

Now, a ghost town still stands in the dunes of the Namib Desert. In the 1980s, the DeBeer mining company decided to turn the former village into a museum.

The only threat to the towns now is the encroaching dunes. Tours are running around here every day for people that want to learn about the area and take stunning photographs.

The Skeleton Coast is an inhospitable land on the northwest coast of Namibia. You’ll need a four-wheel-drive vehicle to drive around here, and you will also have to know how to be self-sufficient should something go wrong.

There aren’t many people up this way, and cell service won’t work. The coast is windy, cold, and often blanketed in dense fog, and there are many shipwrecks along the way.

Gaze across the Kalahari

The Kalahari desert holds more sand than any other desert on earth. Furthermore, it’s the deep red color from a high iron content that makes for some of the most incredible sunsets and sunrises on earth. That combined with a slew of wild game, including meerkats, make it a must-see.

The northeastern region of Namibia is likely the countries wildest section and is still inhabited by one of Africa’s last tribes, the Himba. This is a remote section, and travelers must be self-sufficient or with a knowledgeable guide. The waterfall lies on the border of Angola and Namibia.