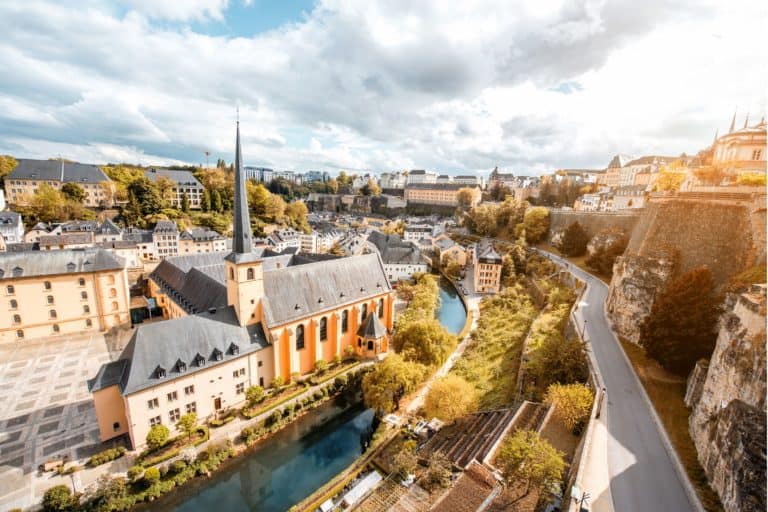 Looking for the best things to do in Luxembourg? We’d known of the little country for a long time, but we’d always made the mistake to skip over it on our past European tours. A mistake indeed, as Luxembourg is well worth a visit. The city and country embody many quintessential European cities and countries.

We were lucky enough to visit during the Christmas season and catch one of the first snowfalls of the season and even take part in Luxembourg’s wonderful Christmas markets.

Best Things to do in Luxembourg

Luxembourg City is a mix of the old and new with highrises rising all over the city, and a pleasant old town located in the heart of the city. It’s a melting pot of nationalities and you’ll often hear English on the streets as many foreigners come to work for banks and tech companies based in the city. It brings a pleasant expatriate vibe to vibe to the city and adds to its character.

Descend to the Grund

Wondering what to do in Luxembourg? Head to The Grund! The heart of the old town is located below the city center along the banks of the Alzette River. It sits at the base of the former Luxembourg castle. Descending down to the Grund feels like stepping back in time and the atmosphere changes to a more relaxed pace. To get down to the Grund easily you can catch an elevator near the judiciary building.

Unfortunately for us, these were closed in the winter so we weren’t able to visit. Casemates du Bock is a series of underground tunnels that extend beneath the city’s former castle. The castle may be in ruins, but visitors can tour a section of the 17km long network of tunnels. They were carved out in the 1700’s by the Spanish military and used as storage defense.

They even housed around thousands of locals in both the World Wars. Now, they are preserved as a UNESCO World Heritage Site. It’s arguably one of the top things to do in Luxembourg during the summer months.

Walk Through the Kirchberg district

This is Luxembourg’s modern center. The Kirchberg district has a number of contemporary art museums and is the home to several European institutions. There are a number of pleasant parks and it’s a nice place to spend a summer afternoon.

One of the best things to do in Luxembourg in the winter is explore the castles! It’s a short drive out of Luxembourg City to find the lovely countryside. There are plenty of attractive villages and many are home to grand medieval castles. When we found ourselves struck by a snowstorm we found refuge in Beaufort where we entered the town’s castle, that was actually inhabited until 2012. Now you can visit for guided tours year round.

The most famous castle in Luxembourg is Vianden Castle and is only about 50km from Luxembourg city. It’s pretty simple to reach via public transports with both train and bus options. The castle was built over 300 years from the 11th – 14th centuries and it is one the largest castles from the Gothic period in Europe. It’s now been restored as a tourist attraction for 40 years.

We had the Luxembourg Card for the duration of our time in Luxembourg, which you can get in one to three-day increments. it covers all transport in the country as well as entry into many touristic sights such as the castle.

It takes some digging as the country is very international and borrows plenty. There is a wide range of restaurants extending from bars, bistros, and gourmet restaurants. They take many of great European dishes and produce them with fresh local products to create great destinations for foodies.

The country also has 12 Michelin starred restaurants. The most common Luxembourgish dish we found is called Kniddelen, a pan-fried flour dumpling, they are most commonly served with bacon and cream. We had two fantastic Luxembourgish meals at Berdorfer Eck in Luxembourg’s “Little Switzerland” and Siegfried in the heart of Luxembourg City.

A really cool thing to do in Luxembourg City is head to the museum. Luxembourg has long been at the heart of Europe and has an interesting history. The museums in Luxembourg have wonderful art exhibitions and plenty of history.

In the heart of the city lies Museum-mile, a street that starts from the Villa Vauban to the highly regarded Museum of Modern Art – Mudam. Unless you’re a big history buff we suggest heading to the Museum of Modern Art to see the best of contemporary art in Luxembourg and around the world.

Squeeze Through Micro Gorges in Mullerthall

Mullerthall is often referred to as “Little Switzerland” due to its hilly landscape and pleasant villages. We were due to go an extended hike through the region when a snowstorm began – so, unfortunately, no extensive hiking for us.

However, there are a number of well-managed hiking trails through the region and its a popular summer activity for many residents, regional neighbors, and tourists. There are even a few well-managed campsites for multi-day hikes!

The most interesting attraction in Mullerthall may be Berdorf. It is a high point that overlooks the valleys of Black Ernz, the Sure, and the Aesbach. From the town are a number of circular hiking paths that lead down through a number of interesting cliffs, rock crevices, and caves. We would highly suggest setting aside a day to go hiking in Little Switzerland, we couldn’t believe just how beautiful it was!

Take Part in the Winter Festivities

We spent an evening at the markets and had a wonderful time eating food and drinking Gluhwein (mulled wine). There are other activities to have fun partaking in such as Christmas concerts, ferris wheel rides, or you can try your hand at ice skating.

We visited Bernard Massard for a tour of their winery and a behind-the-scenes peek at their production. They make amazing sparkling wines that you must give a try when in Luxembourg. The best part of the deal is Luxembourg has lower taxes on alcohol than France so prices are cheaper, but the quality is the same.

One of the best things to do in Luxembourg is to have lunch at the Chocolate House. This cafe and bakery is a bit of an institution in Luxembourg and it knows how to draw a crowd.  As their names suggest they specialize in chocolate and baked pastries.

The cafe is most well known for their hot chocolate spoons – you get to choose a chocolate spoon in various yummy flavors before dipping it in a cup of hot milk (they have vegan options too). I would recommend making reservations if you are planning to visit with a large party on weekends, even though this place is three stories it gets packed!