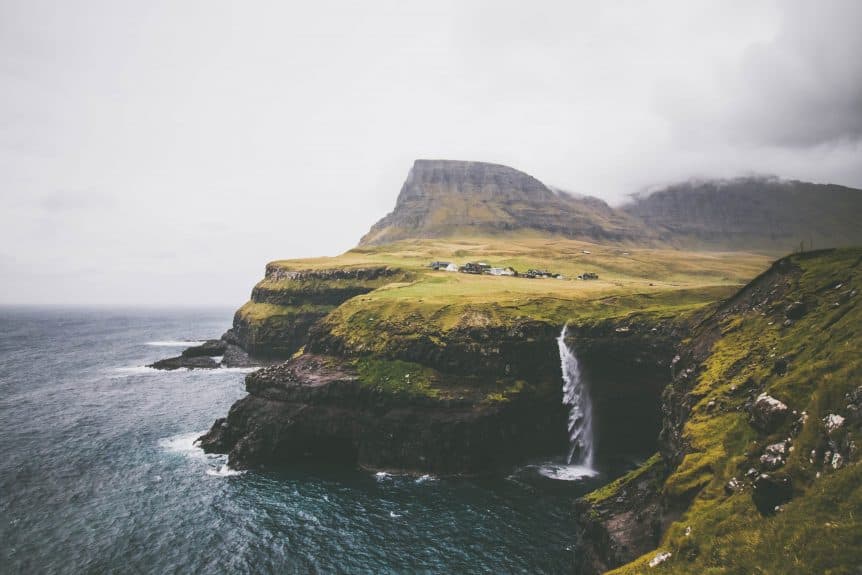 If you were to ask us what the most beautiful islands are in Europe are you wouldn’t get the answer you would expect. Well, maybe you have an idea from the title of this post, but we would definitely say the Faroes Islands! Yes, the group of 18 windswept islands between Norway and Iceland certainly win a spot on our favorite destinations list.

In many ways they remind me of why we love the African bush, they are raw. The cliff faces and the bleak landscape are inhospitable, but it will humble you with beauty.

I can’t think of when I had a bigger grin on my face this year than when I stood on top of a mountain in near hurricane force winds. It felt dangerous, it felt right, and I felt tiny.

We weren’t exactly planning on going to the Faroe Islands this year. Of course, they were always on our travel radar as we had seen enough photos of them on Instagram to know they looked unreal. However, we found ourselves wondering where to go after our road trip around Scotland’s North Coast 500 that we started seriously considering the Faroes. Atlantic Airways runs non-stop flights from Edinburgh to Vágar Airport, the only airport in the Faroe Islands. So we knew it was now or never to get to the untouched paradise.

12 Reasons Why You Should Travel to the Faroe Islands

There is no shortage of waterfalls on the Faroe Islands. It may come as a surprise that 18 tiny islands in the middle of the Atlantic have so much water until you see a weather almanac. The archipelago is wet, windswept, and cold. It rains here year round and temperatures fluctuate between 3 °C and 13 °C.

However, with all of the rain and a foreboding ocean, they are dramatic. The vast amounts of rain cascade down the island’s cliff faces in spectacular fashion. Roads here wrap around the coastline and at times look as if they’ll be swept away as water falls from above.

We spent our days hopping around the Faroes chasing waterfalls. This means the only proper way to explore the islands is via rental car, which we highly recommend getting if you want to explore at all. There is public transport on the islands but the schedules are infrequent and limiting. Relying on buses will likely hinder a fun holiday here. 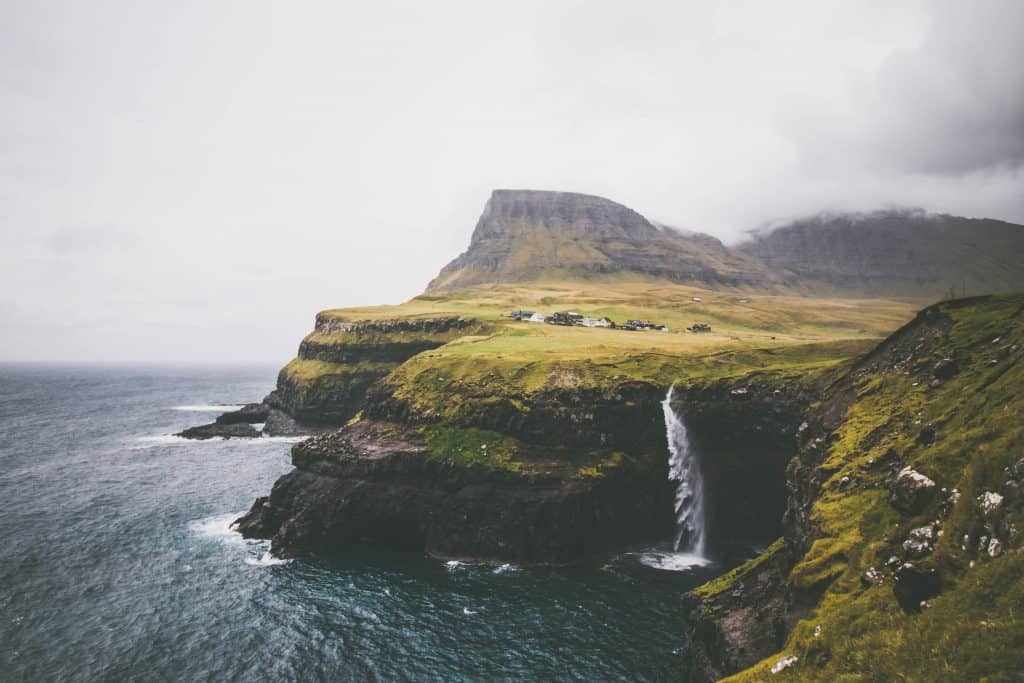 Wonder why someone would want a golf course on their roof? A grass roof operates as a form of insulation keeping the homes warm in the winter and cool in the summer. In the olden days, they also did a great job at protecting from the rain.

The homes are seriously beautiful and actually more expensive to maintain than a standard roof, so it’s become a sign of wealth and aesthetics. And yes you can mow a roof… 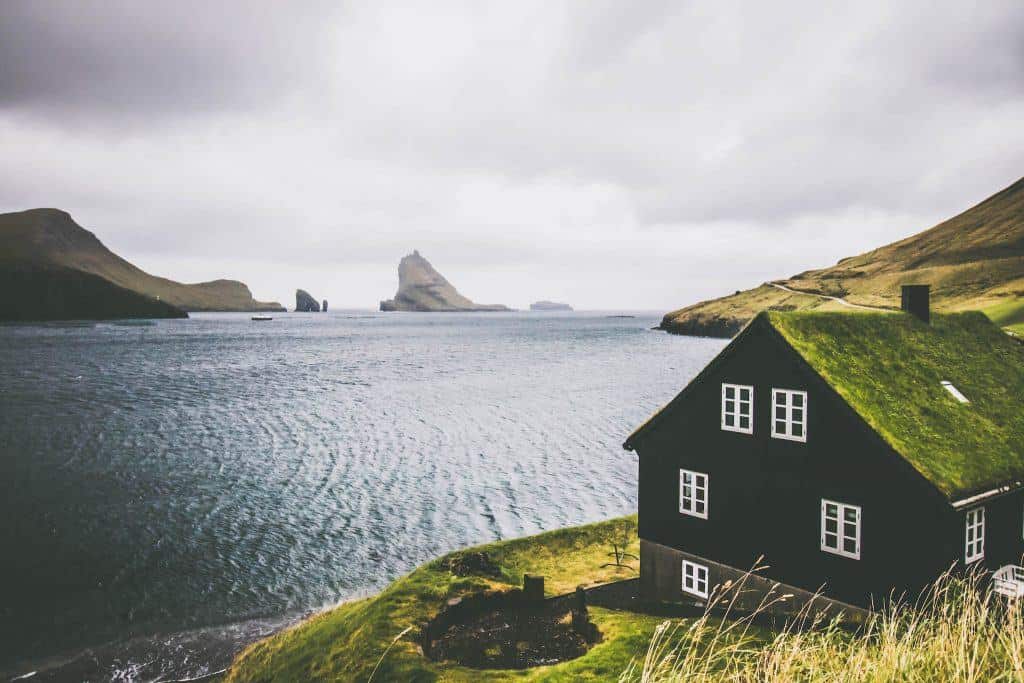 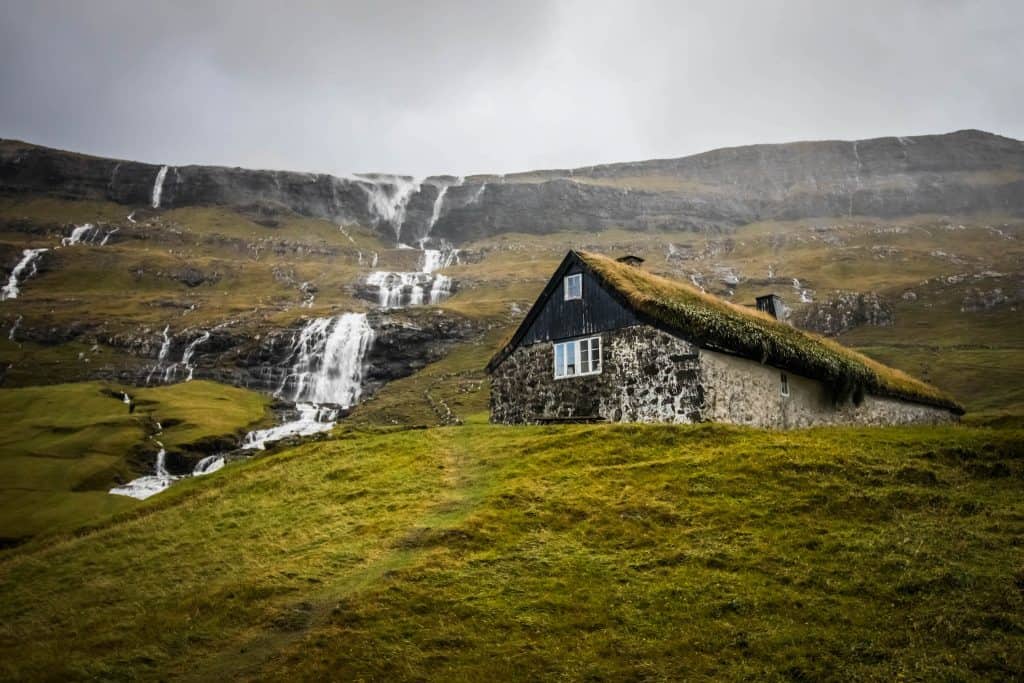 It’s likely you won’t find the islands on many lists for island getaways because they receive nearly 300 days of rain a year! Then to top it off winds here are unpredictable. Wait. It feels like I’m stating why you shouldn’t visit the Faroe Islands. That’s not the case at all!

There is nothing one of the best packable down jackets and the right clothes can’t fix!

All of this weather only adds to the mystique of the Faroe Islands. If it was sunny and warm you wouldn’t find snow-capped peaked, dramatic cliffs, and gorgeous waterfalls. These are islands lost in time and a cloud of fog.

Exploring the mountains and hills of the Faroes are immensely rewarding. The islands are mostly wild so you’re free to explore as you please. Many of the trails follow old cairns and paths used before there were roads on the island. The island has nearly 340 mountains so it’s unlikely you’ll ever climb them all as a tourist! But this Faroese guy has, and he has a website to tell you about it!

In case you didn’t know a cairn is a stack of rocks used to mark a direction. Some of the cairns and footpaths date back centuries so be sure not to knock over a piece of history. 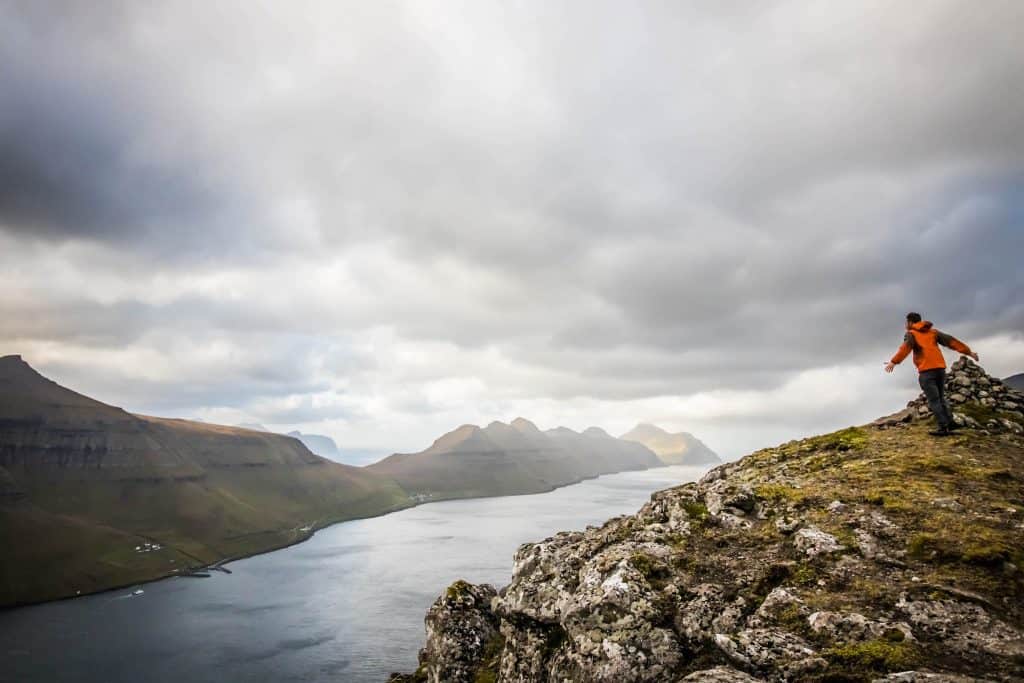 Just like Iceland and Greenland the Faroese are the descendants of Vikings. Despite being under Denmark the country does not have Danish roots. The Danish Kingdom actually received the islands in 1814 in a treaty with Norway, and they have been a part of Denmark ever since. In modern times they are actually a semi-autonomous region of Denmark with their own parliament and laws.

They actually have traits in common with Iceland. Faroese is even similar to a dialect of Icelandic! They are also very well connected to Iceland and are a great addition to any trip there.

With all of the drama that unfolds and nearly 24/7 light in the summer months, the Faroe Islands are a photographers dream! If you’re going to head to the Faroe Islands we suggest you pack of these great travel cameras and laptop to capture the trip. 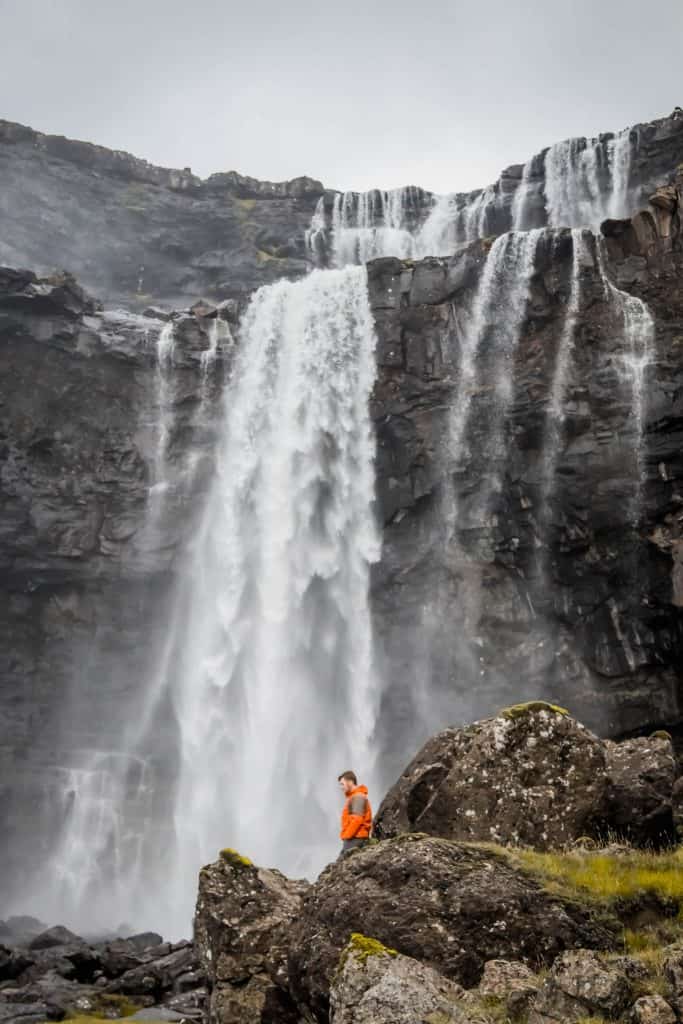 There are roads that are dedicated to the most scenic drives, they even have a cute name, “Buttercup.” C’mon how can you not love that a single lane road named buttercup that also has 2000 ft cliffs and no guard rails? 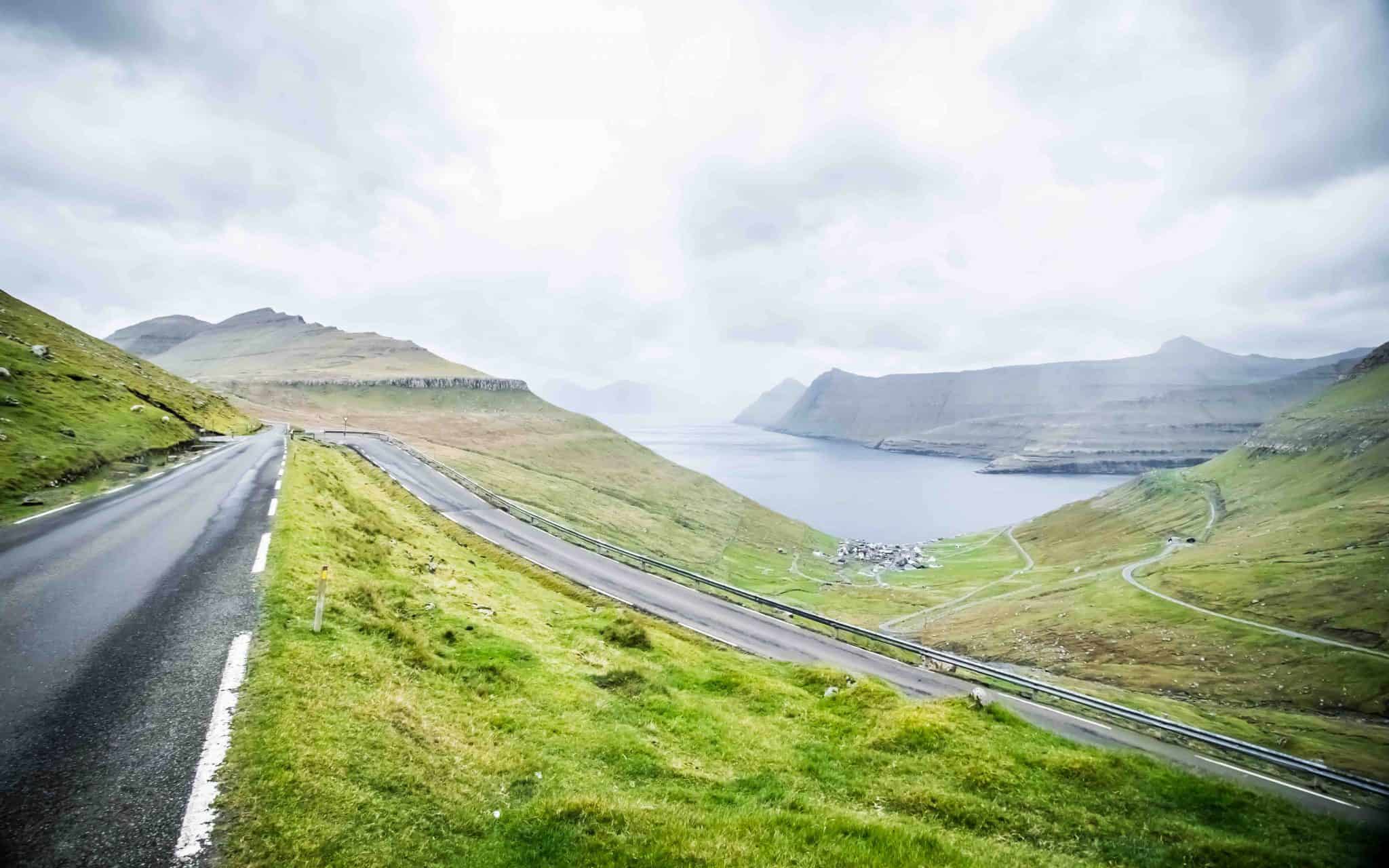 Although we enjoyed traveling Iceland, we really felt different traveling in the Faroes. We rarely found other tourists, and never ever saw a giant bus full of foreigners like in Iceland. We were able to stop at beautiful spots and see only a few other people enjoying the views too. If you want to escape the crowds like us, the Faroe Islands are your calling. 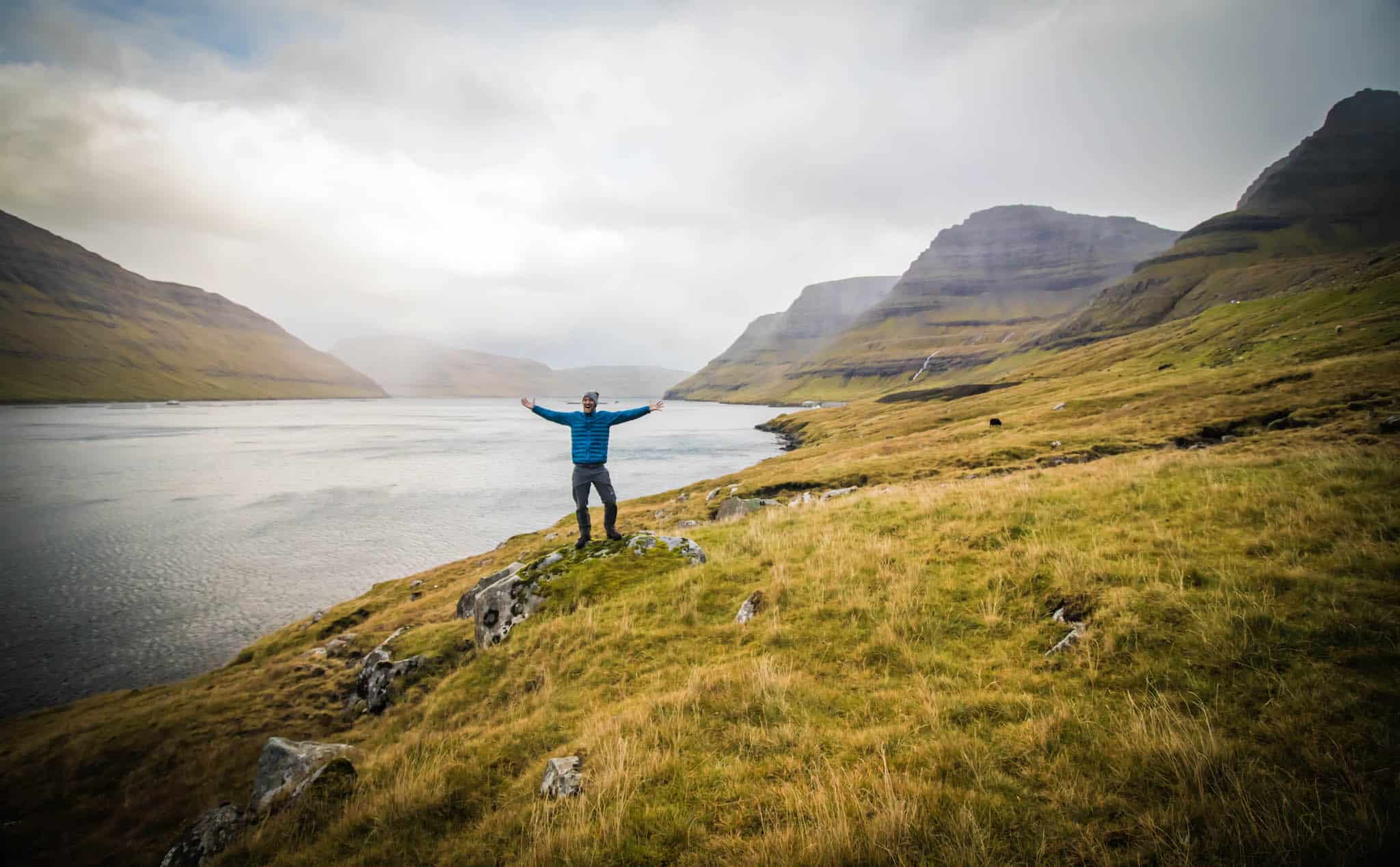 They Have the Best Looking Livestock

The resident sheep population outnumbers people on the Faroe Islands, by about 30,000. yes, there are estimated to be more than 80,000 sheep in the Faroes! The Faroes sheep are a unique breed of sheep only native to the islands after centuries of breeding. You can also find the Faroese pony, duck, and goose here. 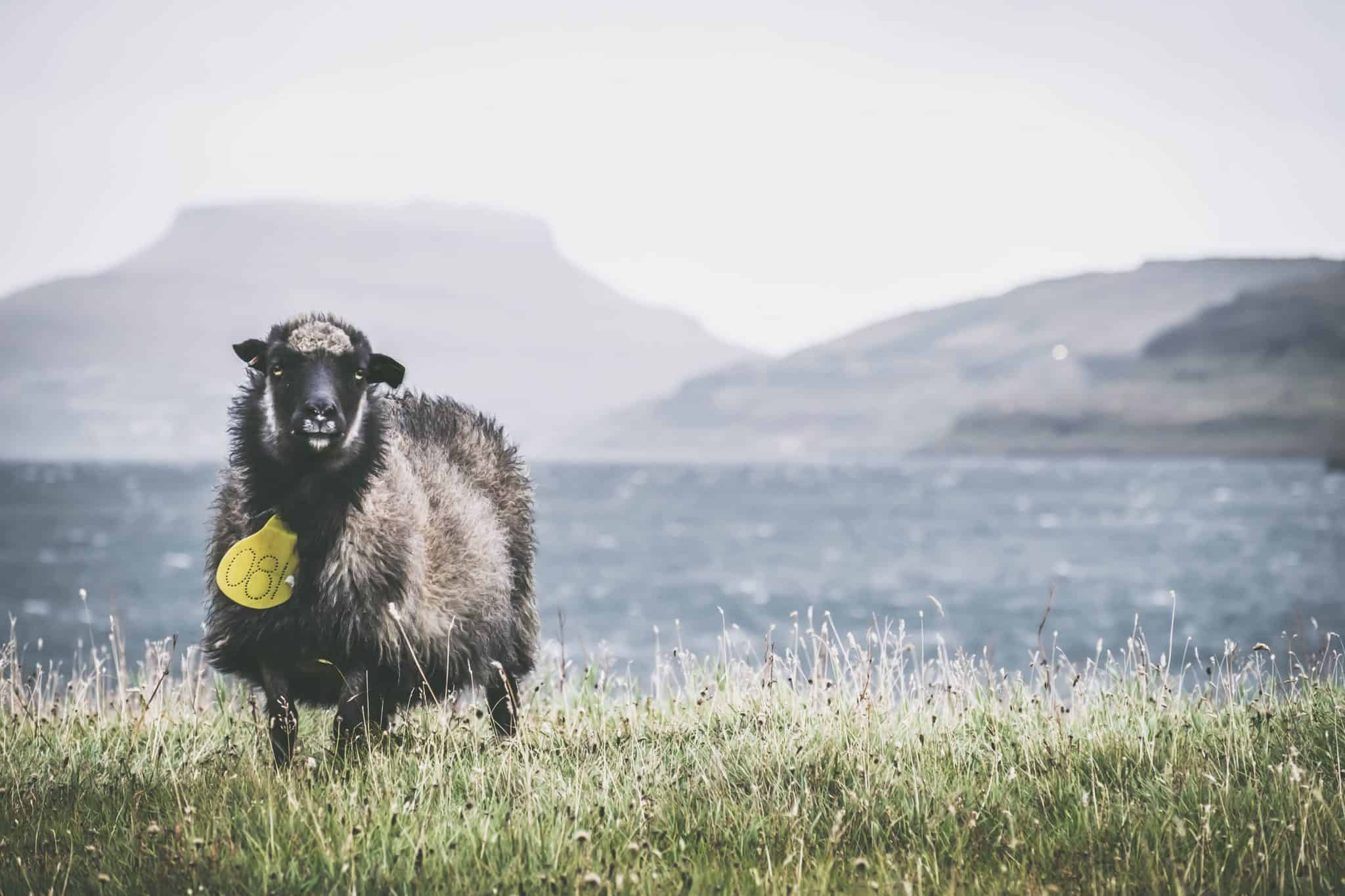 There aren’t a plethora of restaurants on the Faroe Islands. However, there are a number of places that take dining very serious including one Michelin star restaurant that’s worth a trip to the Faroe Islands alone. We were lucky enough to try out three of Tórshavn’s best restaurants, Barbara Fish House, etika, and Áarstova.

Our meals at the three restaurants were beyond amazing! We enjoyed Barbara Fish House’s signature “From our Fjords” tasting menu that featured a number of Faroese specialties. It included some monkfish that may have been the most spectacular seafood dish we’ve ever had. Tasha was able to get here sushi fill with
etika and the fish was amazingly fresh.

She even claimed that etika had some of the best sushi she has ever tasted – and that is saying something for a sushi connoisseur like her.  For a local fine dining experience, we made our way to Áarstova. Áarstova has a prime location in a historic building in Downtown Tórshavn and serves delicious and local cuisine in the form of three or five courses. 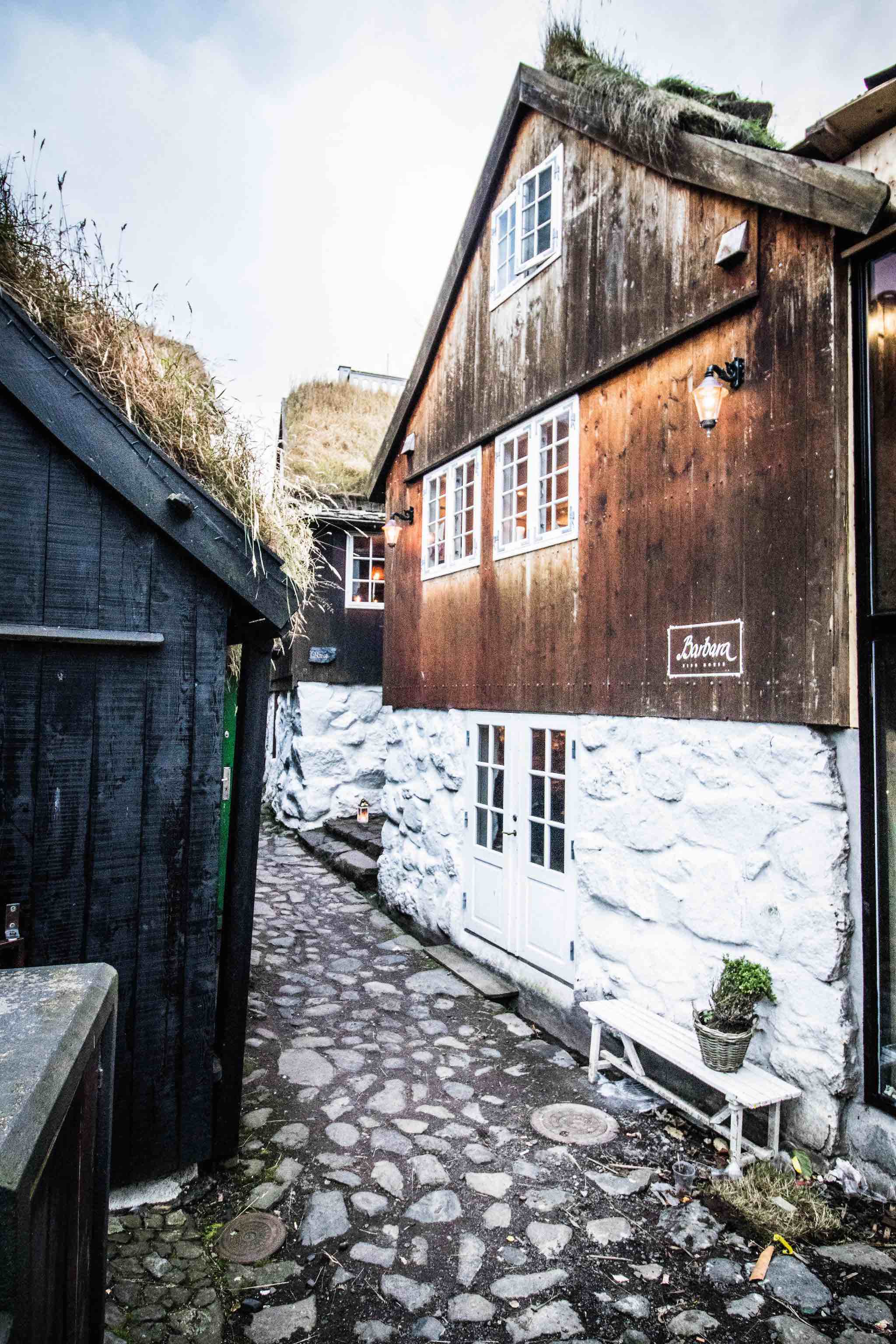 They Will Humble You

Humans are minuscule in the grand scheme of things. With globalization and the impact we have on the world today it’s easy to forget that. The Faroe Islands will humble you, they will bring you back down to size. It’s tough to describe the feeling when you look out from 100-meter cliff to an ocean battering its walls, other than small. 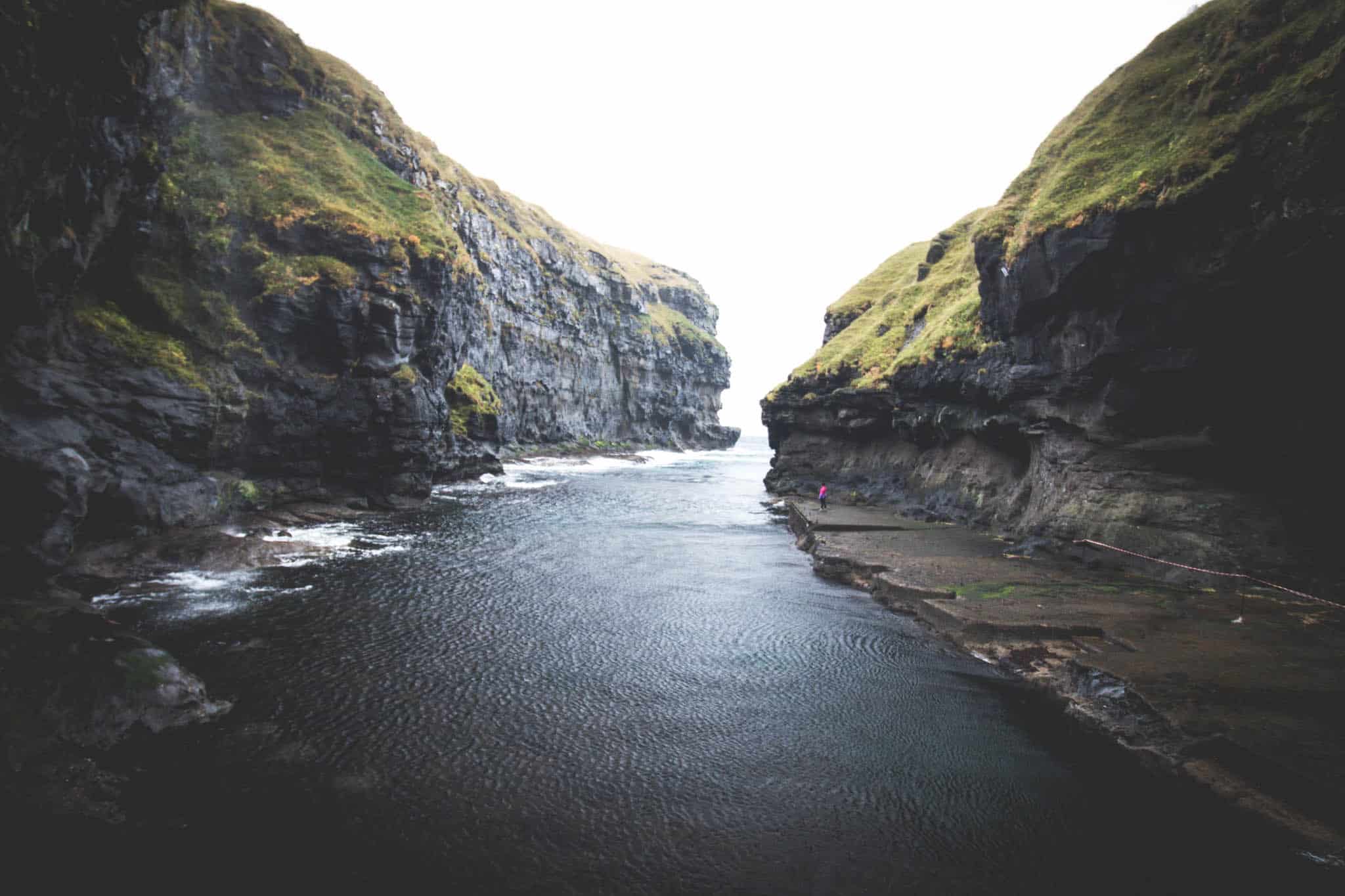 There is (pretty much) NO Crime!

Did you know there is no prison on the Faroe Islands? The islands are well known for their extremely low crime rates and friendly locals. Their unemployment rate also sits at around 2.2%, making it one of the lowest in the entire world!

So, if you’re on the fence about visiting the Faroes or it’s your first time abroad you can rest assured knowing there is no serious crime here. The most damage you’ll likely get into is go hiking right off a cliff!

and now, some visuals…

Plan Your Trip to the Faroe Islands!

We rely on a few trusted websites that help save us money and time when booking hotels, flights, and car rentals. Check out some of our preferred partners below:

Want a Free E-Book on How To Travel More?
Join Natasha and Cameron's newsletter filled with the latest travel tips, giveaways, our favorite destinations.
Give it a try, you can unsubscribe anytime. You'll receive an email with the e-book after subscribing.