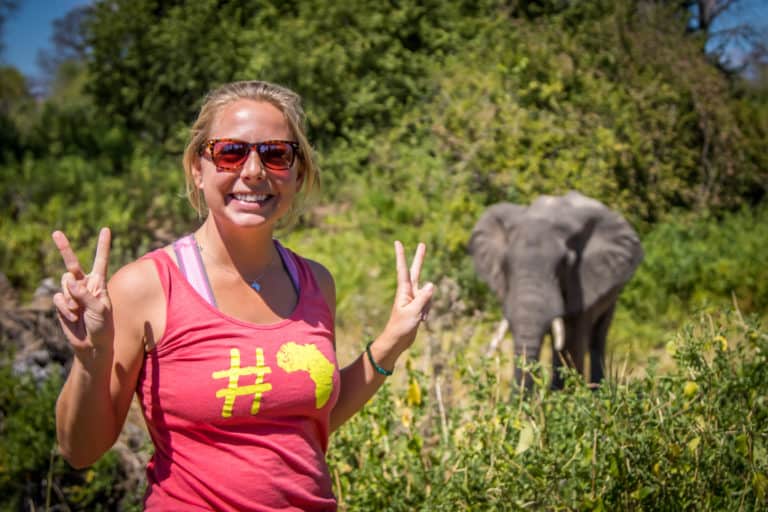 There are so many great places to visit in South Africa, that the country is the perfect destination for any traveler. It is full of experiences not to miss in one’s lifetime.

See wild lions, catch a wave on a surfboard, relax in a 7-star lodge, jump off the highest bridge bungee bridge in the world, snap a selfie with penguins, or get up close and personal with whales.

We just spent two months touring the beautiful country and here’s our list of must-see places in South Africa.

The animal and plant diversity here is staggering with 404 woody plants and 224 kinds of grass, 53 fish, 34 amphibians, 118 reptiles, 517 birds and 147 safari animals. So grab a guidebook and start checking off your sightings because you will lose count. For more info check out the national parks site.

Located on the Southwestern tip of South Africa, Cape Town is a must visit place in South Africa. It is Africa’s most visited tourist destination and has one of the best backdrops in the world with the iconic Table Mountain. The city enjoys mild year-round weather and is surrounded by natural beauty.

The surrounding cape area is gorgeous offering beautiful beaches, wine lands, and mountains. You can see wild penguins, shop at a wonderful craft market, climb a mountain, indulge in an adventurous activity, and dine at a hip restaurant all in one day in Cape Town. It’s not hard to see why so many people flock here.

The Drakensberg Mountains are definitely a must visit place in South Africa for us as I have a passion for a good hike. The Drakensberg region offers some of Africa’s best hiking, and maybe even some of the best in the world. You have great mountain lodges, dramatic mountains, snowboarding, culture, the Golden Gate Highlands National Park, and the best small town in South Africa here.

It all culminates in one of the most impressive natural formations on the planet, The Drakensberg Amphitheater. Don’t forget to visit the mountain country surrounded by South Africa, Lesotho. We stayed at a number of charming places, but the highlight was the Montusi Mountain Lodge.

Do you like to drink wine? Because the wine lands around the Cape of South Africa produce some of the best wines, making Stellenbosch a great place to visit in South Africa. You can choose from Paarl, Stellenbosch, and Franschhoek for a great wine tour or all of them. We visited Stellenbosch, the largest, and sampled some of their fine wines.

They make excellent Sav Blanc, Chenin Blanc, Shiraz, Cabernet, and their own specialty Pinotage. The whole region is stunning with plenty to offer, such as fine dining restaurants and boutique hotels. Our two favorite places to stay were Oude Werf and Rozendal cottages.

This fishing town is home to whale-watching. And it’s proximity to the Southernmost point of Africa makes for a great day trip from Cape Town. The real draw here is the ability to see whales, seals, manta rays, and sharks in the wild. And for those brave enough you have a chance to see great white sharks up close and personal from the water from the nearby town of Gansbaai.

Yes, we even got in the water and took a dive with them! The sharks are massive, beautiful, and terrifying. In Hermanus, you come to respect the majestic marine life in our oceans and understand just how important it is to protect.

One of the Many Townships

A major reason to travel to South Africa is the culture. It’s not in the fine restaurants, art galleries, or national parks. The culture of South Africa stems from the brimming townships. They are an important aspect of South African history. A living testament to the damage inflicted by Apartheid and a harsh reminder of the poverty that afflicts Africa.

It is also a source of vibrant culture. The streets are filled with street art, colorful houses, and smiling faces. Don’t listen to the bad rap they often receive, with the right tour guide they are safe and welcoming. One must simply know where to go.

The Garden Route is right along with Cape Town for being one of the most trafficked tourist destinations in South Africa. This beautiful stretch of road along the coast extends from Mossel Bay to Storms River. The name comes from the unique vegetation that can be found here with quaint towns and cities dotting the coastline. It’s also home to one of our favorite game reserves offering visitors to explore the Fynbos.

Towns like Knysna, Plettenberg Bay, and George are sure to the amuse those looking for something more relaxed, like day walking along the beach followed by a fresh seafood dinner along the water. Or you can throw yourself off the world’s highest bridge bungee instead!

Madikwe is a tremendous reserve located in South Africa’ North West province home to 10,000 animals that are spread out over 60 species including the legendary Big Five. Madikwe is easily one of the best places to visit in South Africa.

While many think of Africa’s National Parks for safari, there are some tremendous private game reserves such as Madikwe that promise to deliver visitors and unforgettable safari. Madikwe is the fifth largest game reserve in South Africa.

We spent four incredible days here and on our first game drive out we were treated with sightings of rhino, leopard, elephant, and everything in between. It’s a great alternative to Kruger National Park and is only a four hour drive away from Johannesburg.

We’ve been fortunate enough to have some incredible safari experiences over the years, but riding through the bush on horseback was a first. The Ant’s Collection located in the Waterberg in South Africa has been treating guests to horseback safaris for two decades.

So for a long weekend or day trip from Johannesburg, we were treated to some delicious food, luxurious accommodation, wildlife, and some beautiful horse rides. It wasn’t our first time riding a horse, but we’d never rode at a canter through a private reserve before.

Riding a horse up to a giraffe or other antelope is a completely different safari experience than when in a game viewer. The safari animals view you and your horse as one animal, instead of a human and animal and let you get incredibly close. No sound of engines or exhaust here – just pure nature.

40 species of animals roam the reserve including zebra, sable, roan, wildebeest, eland, rhino, porcupine, and giraffe. It’s also not an official resident, but we did come across leopard tracks as they’ve been known to migrate through the region with their ability to scale fences.

There are Plenty More South Africa Must Sees!

This is really only the tip of the iceberg of best places to visit in South Africa. It’s a big country filled with hundreds of interesting sites. We could spend several months exploring South Africa and still not feel we’ve seen it all. However, if you’re pressed for time checking one or all of them off the list are sure to not disappoint any visitor to South Africa.

Book A Safari in South Africa

Search For A Safari in South Africa

Traveling Africa on your own can be daunting to many travelers. However, there is no need to fear with overland tour companies who will show the ropes and a great time. You can check out some of them here to compare the different companies and possibly score a discount.

Chances are you’ll want a camera for your trip to Africa. Our favorite pocket-sized point and shoot camera for quick trips are the Sony RX100V. It takes fantastic photos and video and is the size of your palm.

For more professional photographs we use our Fuji XT-3, and LOVE IT.

A good hat is both stylish and functional. In peak dry season there is little to provide shade, UV rays are intense and can easily burn the unsuspecting traveler. Check out our full break down of the best safari hats here!

A great daypack for travel is a solid idea to throw your stuff in for game drives and bush flights. Or you could try out a safari backpack.

You’ll want a safari shirt while on safari. They are lightweight and keep the bugs away. Plus they look ideal in photos and blend into the environment around you!

Sometimes it’s nice just to have a real book in your hands when traveling. We recommend picking up a Lonely Planet to get you through the wireless nights. Are you going on safari? We always carry our Robert’s Southern Africa Bird Book and a good mammal guide. 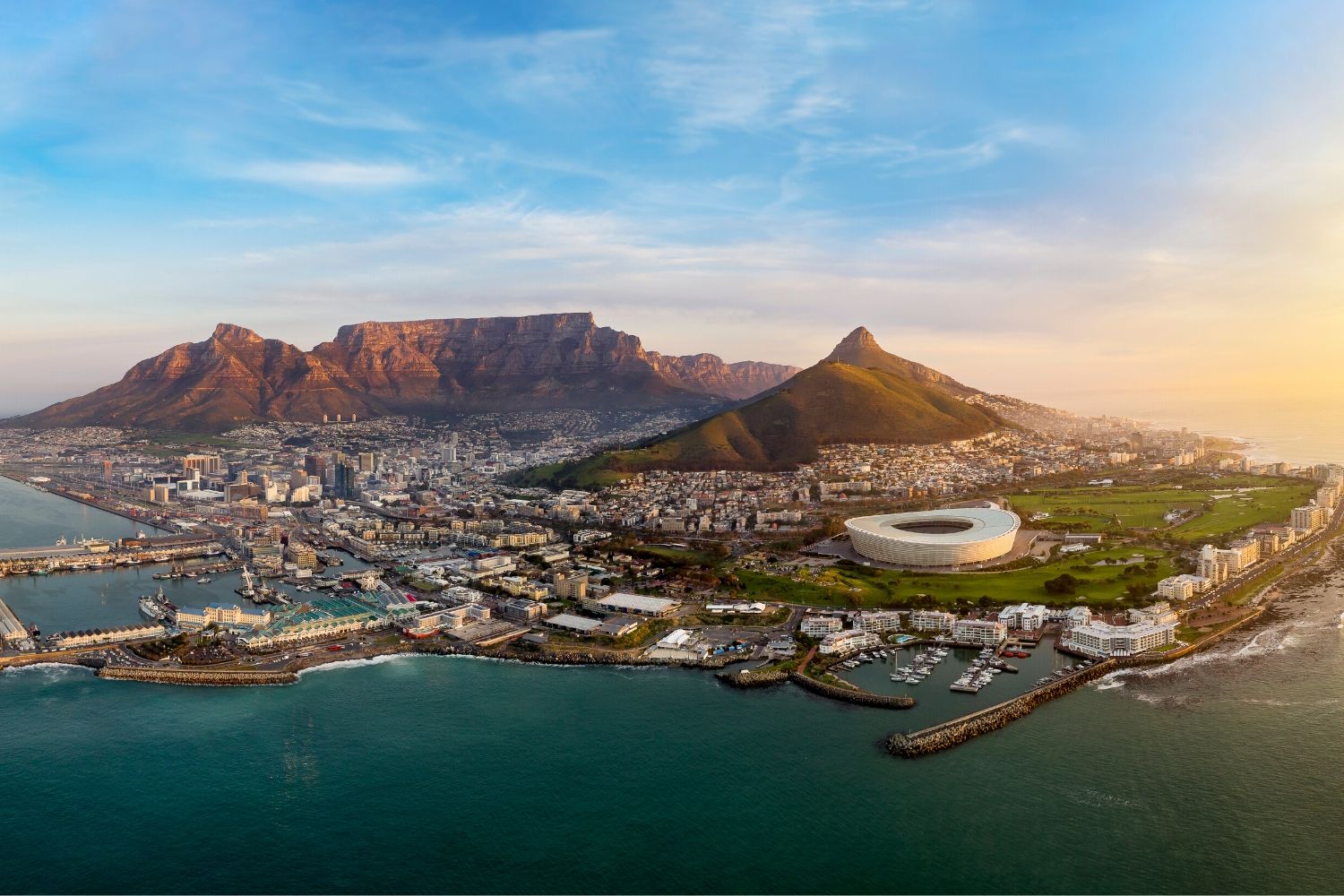 If there is one city in the world I am dying to return to, it’s Cape Town. It’s a city too beautiful for its own good. Where one can get… 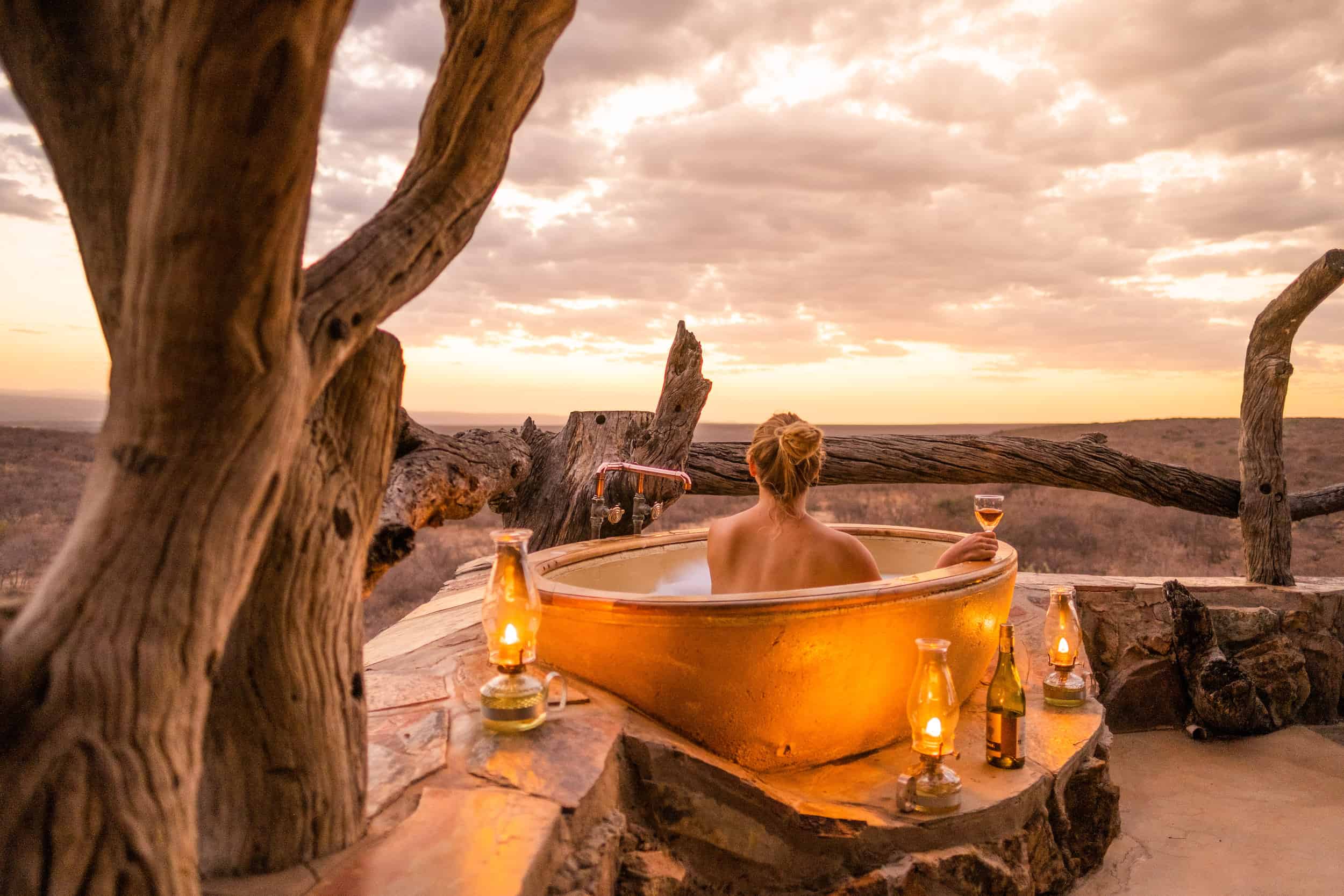 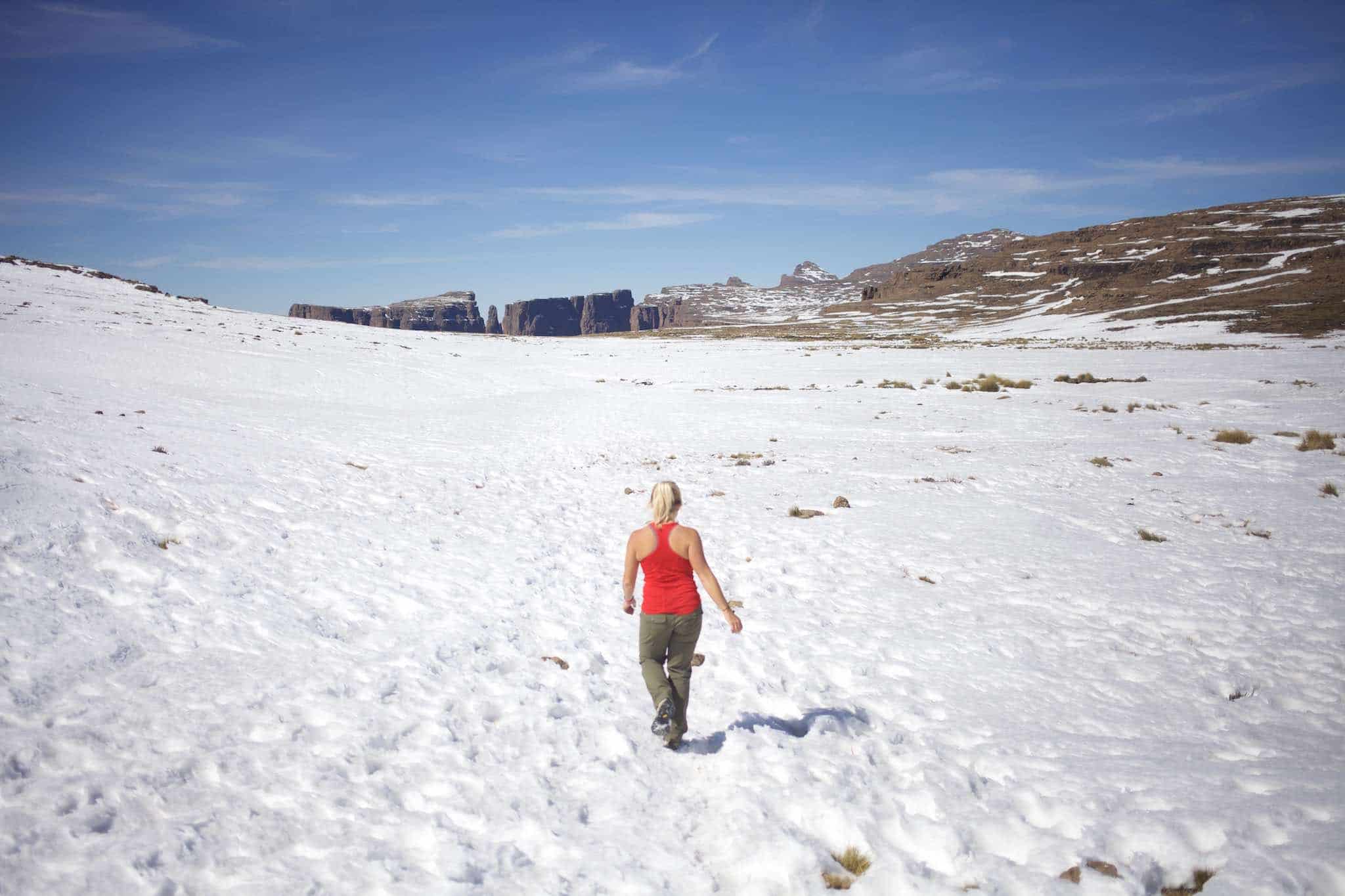 The Ultimate South Africa Road Trip Itinerary A road trip in South Africa is the ideal way to explore the country. South Africa has a good infrastructure of roads and… 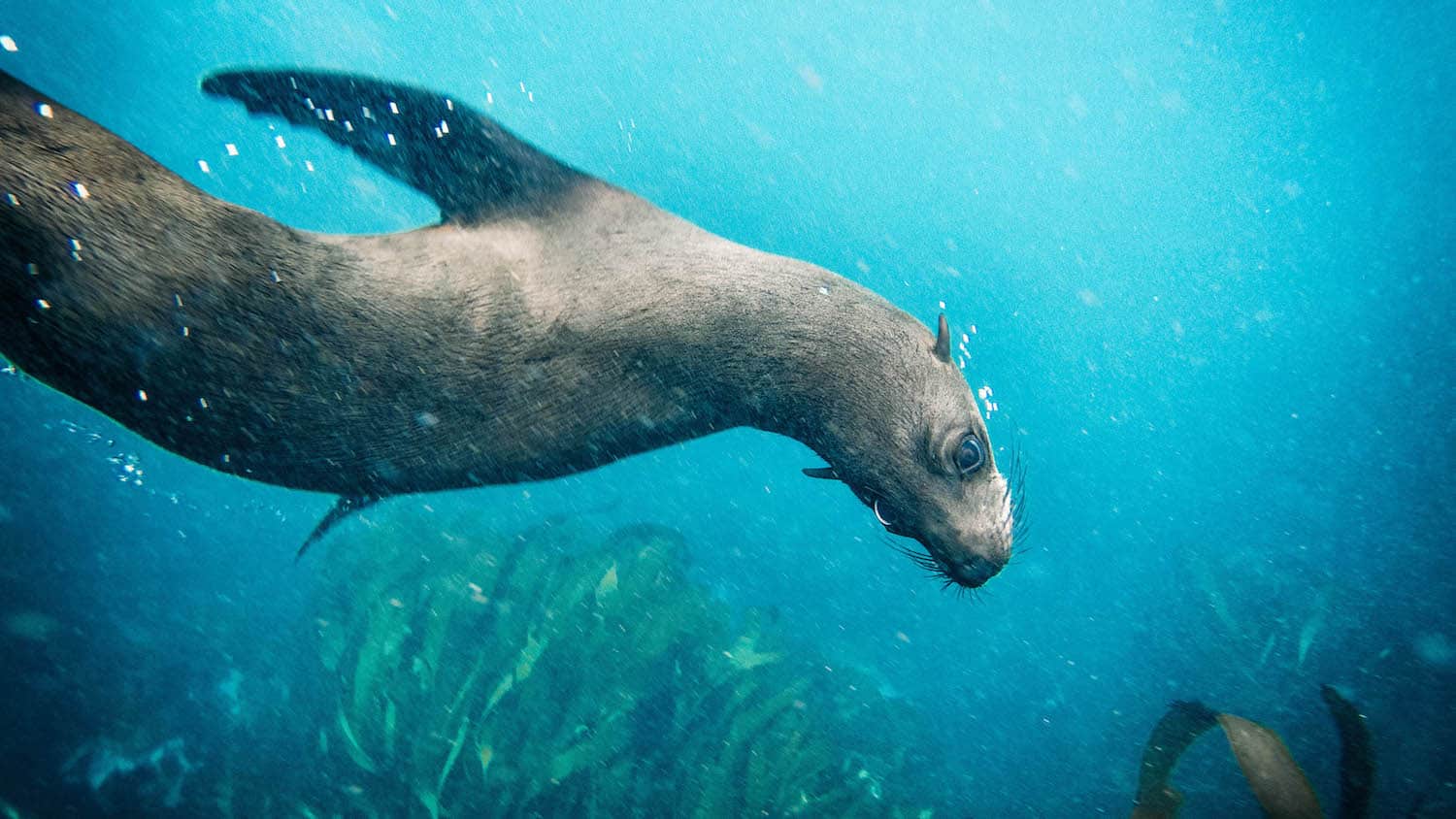 There are so many adventures in Cape Town, it’s hard to count. Visitors can choose from every standard adventure sport, such as kiteboarding, surfing, mountain biking, hiking, and skydiving. However,…